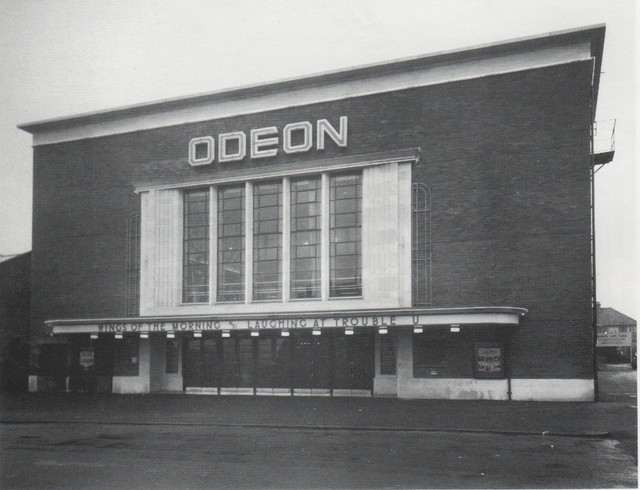 Originally intend as a Lou Morris scheme to be named the Ritz Cinema, the cinema was bought during construction by Oscar Deutsch’s Odeon Theatres chain and opened 27th November 1937 with that name. The Odeon North Watford opened with Annabella & Henry Fonda in “Wings of the Morning” plus “Movietone News”, a cartoon “Orphan’s Picnic” & a coloured musical “Hollywood Party”. The fim “Laughing at Trouble” starring Jane Darwell joined the main feature for the rest of the week.

It had a wide plain facade in brick with a tall central window above the central entrance lighting the circle foyer cafe.

The 1,394-seat auditorium had 942-seats in the stalls and 452-seats in the circle. It was fabulous, designed in the cut away style by architect J. Owen Bond, there were four segments decending towards the wide plain proscenium arch with more of the honeycombe plasterwork used at the Gaumont. The interior decoration was by the well known interior designers Mollo & Egan. Lighting was entirely indirect, with coloured variations enhancing the gold and silver decor of the cinema. It was easily the most distinctive design in Watford.

However the proximity to the centrally located Odeon and Gaumont cinemas meant that the Odeon North Watford never had access to first release films and consequently was never a big player in town. It was amongst the first batch of the circuits cinemas put up for sale in 1959 and closed on 30th May 1959 with Terry Thomas & Peter Sellers in “Carlton-Brown of the F.O.” & Donald Houston in “The Girl in the Picture”, after a weeks run of the two films seen at the town centre Odeon three weeks earlier. It was sadly one of the shortest lived of the purpose built cinemas in the town.

It was converted into a Waitrose supermarket, ironically retaining much of the decor of some areas such as the cafe/circle foyer, but Waitrose closed on 24th October 1987. The building stood derelict unti it was demolished in mid-December 1988 to January 1989. A block of flats named Gladesmere Court was built on the site.