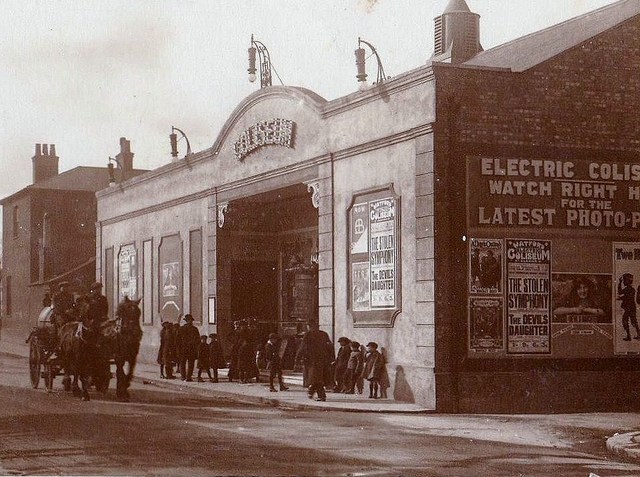 Located on the corner of St Albans Road and Bedford Street, Watford, Hertfordshire. The Electric Coliseum was opened on 1st October 1912. It initially had 650 seats and was designed by architect Henry E. Mence. Around 1919 it was enlarged to 900 seats to the plans of architectural firm Mence & Finn.

Further alterations were carried out in 1930 and it was enlarged slightly to 960 seats, all on a single floor. It was equipped with a British Thomson Houston(BTH) sound system, and re-opening as the New Coliseum Cinema. Italian views were painted on the side-walls of the auditorium.

It received a new modern façade in December 1936 and was re-named Plaza Cinema. In 1948 it was taken over by the Southan Morris chain of SM Super Cinemas. The Plaza Cinema was never equipped with CinemaScope, and closed on 31st July 1954 with “Bomba and the Jungle Girl” and “Wild Stallion”.

The building was demolished in 1957, and a car tyre sales depot was operating from the site by 2002. In 2015 it serves as an M.O.T. Station, which checks vehicles road worthiness.