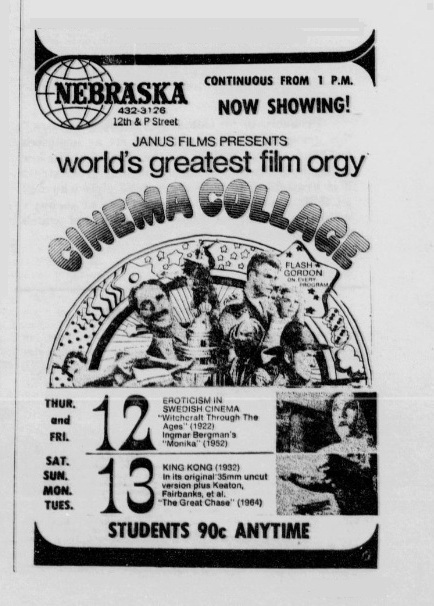 Listed in Film Daily Yearbook in the 1940’s as being operated by Paramount Pictures Inc. through their subsidiary Joe Cooper. The seating capacity had been reduced from the 1,500 given in 1941 to 1,226 in 1950.

Here are excerpts from an article in the Nebraska State Journal, dated 3/26/39:

No one entering the Nebraska theater Wednesday night, March 29, will see anything to remind them that the house was once the Orpheum.
Two scenes of the theater are shown in the photos above, the much-mirrored foyer with reflecting glass on sides and ceiling, and the main floor seating arrangement. Consultation of leading architects and color experts in theater building make the Nebraska the most modern theater in Lincoln, and newest dedication to audience comfort, entertainment, and homelike surroundings.

Great care has been taken to make the outer lobby and foyer wide and spacious, and at the same time genuinely inviting and attractive, so that the guest or patron who enters the theater will be struck with the unusual idea which Boller carried out. The front of the theater has been completely torn away, and new pilasters, or columns, extend
to the ceiling of the auditorium. New box-office and new entrances
also make a great difference, together with a new wide stairway to the mezzanine floor and balcony. Lounges, stairways, drinking
fountains, furniture and all have been placed to make the Nebraska
truly a warm, distinctive theater.

The marquee, which has five sides, faces both 12th and P streets. The entire sign is vividly lighted with high intensity neon tubing, and each side will carry a three channel attraction display, made of white glass with metal letters.

Here is another 1939 article, written by Barney Oldfield (probably not the race car driver):

The only thing reminding the patron of the Orpheum is the location. Everything else is new and modern. It took the equivalent of the president’s annual salary for handling the government of the United States to redress the theater.

If the show is good at the Nebraska, and it probably always will be since the choice of major product is scheduled for the theater, always remember to go early. There are only 1,236 seats in the theater, and NO standing room.

“Dodge City”, the picture which glamourizes the old frontier jumping-off place in our neighboring state of Kansas, is scheduled to follow the opening “Ice Follies of 1939” on the screen.

Old Orpheum legend: There is the tale, still told around town, that when the house originally opened in 1916, a woman collapsed in the lobby. Snaked out of the crush and into an ambulance, she gave birth to a baby en route to the hospital.

When the “name” contest for the theater was concluded, it was found that 187 names had been suggested for the theater, but Nebraska was predominant in the voting.

Ushers for the Nebraska were selected from the cream of service at the Stuart and Lincoln theaters. The boys are all schooled in courtesy and prompt service and instructed to give the patron the best possible seat available when he arrives.

Women will have a great time in the Nebraska, because there are mirrors every place one may point the eyes, even on the ceiling of the foyer.

It is the intention that the Nebraska shall be the ace movie house of Lincoln, specializing in the best single feature policy available.

There are modern buildings on all four corners of North 12th and P, so I doubt if this theater is still standing.

This was in Boxoffice magazine back in August 1962:

LINCOLN-Bert Cheever, Nebraska Theater manager, has to give top rating to the live drama enacted just doors away over his current film, “Bon Voyage”, on the night of August 11.

The real-life drama climaxed in the shooting and death of an ex-convict, Joe Cline, after he tried to rob the Acme Liquor store just west a few doors and across busy O Street from the State Theater. The death dealing shot was fired by liquor store owner George Christopulos as the former convict was leaving the store with more than $100. He had ignored the store owner’s warning to stop.

The Nebraska Theatre was demolished in 1972 by its operator, the Cooper Foundation, to make way for the foundation’s new 4-plex, the Cooper Plaza. The new theater was to have about 1200 seats, according to the report in Boxoffice, June 19, 1972. The new building would also house the offices of the foundation and of Cooper Theatres.

Great looking pictures,wonder if Theatre Booking Service handled the Features out of Omaha.

The 1912 photo currently displayed above probably belongs to this theater.