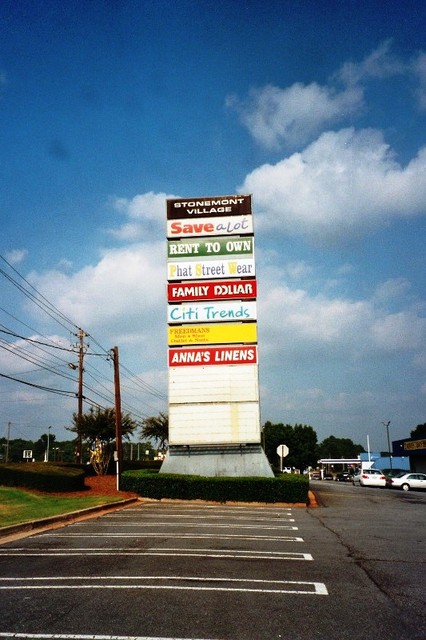 Following the criminal twinning of the Phipps Plaza Theatre, the ABC executives decided to expand into the fastest growing county in Georgia, Dekalb, a suburb of Atlanta. The theatre was built at the end of the new Stonemont Shopping Center (hence its name) located at the intersection of Memorial Drive and Rays Road. The shopping center name came from the proximity to the mountain and town of Stone Mountain.

This was truly a pure set of twins. There was one box-office which had two ticket stations, each one dedicated to one theatre. The lobby was divided by the concession stand which could serve both theatres. Each lobby had its own set of rest rooms. The auditoriums were good sized each seating 500. When compared to theatres today they were real palaces with fully curtained walls, wall to wall screens with curtains, and rocking chair seating. The projection equipment was unremarkable, 35 only although Dolby was added to the #2 side in 1978.

The Theatre #1 opened first, on a Friday June 25, with the reissue of Walt Disney’s “Peter Pan”. Neither the theatre nor the shopping center was ready. On the morning of the grand opening the drink machines and poppers were being installed in the concession stand. The parking lot directly in front of the boxoffice was paved, but 90% of the lot was still graded Georgia red clay. There was already a line reaching around the building an hour before showtime, but it was held outside for the opening ceremonies and to give the staff time to sweep all of the construction debris into the lobby of Theatre #2 which was not due to open until the next week. Just as the ceremony was getting underway, one of Atlanta’s trademark thunderstorms erupted, soaking the crowd, the Lakeside High School Band, the Chairman of the DeKalb County Commission, Miss Georgia USA (who was there to cut the ribbon), Bob Neal (the MC) and myself. To the best of my recollection, most of the ABC execs made it inside the lobby leaving the city manager and manager, who had transferred from the Phipps Plaza, to pacify the crowd. A time capsule was buried containing contents approved by Dekalb County Libraries and the first 300 children to bring along their photographs would have them buried so they could see what they looked like when the time capsule was to be opened in 2000 A.D. Amazingly, most everyone was pretty good natured about the whole thing and following the film cutting ceremony, a capacity crowd of 500 plus trooped in to see “Peter Pan” for the then unheard of price of $3.50 for adults and $1.50 for children.

At the time, Stonemont was the only theatre of any type for a good 10 miles and the only first run theatre for at least 16. “Peter Pan” played to capacity crowds for the weekend, and the next Wednesday June 30, 1976, Mel Brooks “Silent Movie” enjoyed a much more sedate and organized but no less well attended opening of the 500-seat Theatre #2. This was the beginning of about 5 great years for this venue. Even in those days of much more restricted releases, Stonemont was in a zone by itself and the only limit to the number of good movies it could play was its lack of screens. There were a lot of teenagers in this area and movies such as “First Love” and one, the title of which escapes me but starred Sally Field and Henry Winkler, did huge business there, much better than their overall performance. Although they ran many worthy movies, it took the booking of “Sgt. Peppers Lonely Hearts Club Band” to finally get Dolby installed. I will not try to list the hits that played there, but you can figure it out for yourself by just looking up the biggest films for each year. Since there was no competition, they got them all.

Of course this kind of thing could not go unnoticed, and by 1981 other companies were starting to move into the area. Septum, a company that got its start by picking up defunct Jerry Lewis Cinemas, opened a quad across the road in 1982, followed by a 5-plex just down the road a year or so later. By that time Plitt had bought out the ABC chain and soon opened a 6-plex next to the Septum 5. Soon, Cineplex bought out Plitt and opened a 6-plex just across the line in Gwinnett County. Last, as usual, to the scene was General Cinema which opened a very nice 8-plex at Hairston Road, just in time to see the bottom drop out of the market. By the early-1990’s every one of the sites I have described here had closed at some point, and I think that at one point they were all closed at the same time.

Cineplex closed the Stonemont Theatre in 1995. It reopened as a discount theatre in 1997 and closed in 1998. It has been years since I have been out there, but the last I heard the building itself was still standing, waiting, I suppose, for the area to turn around so it can be demolished, like everything else in Atlanta, to make way for the 21st Century.

Thanks for the aerial view,the front is different from my twin theatre I worked at for ABC/Plitt,but the white painted concrete blocks look the same,i bet in inside it was the exact copy of Columbia 1 and 2 or Columbia Square Cinemas as noted on CT.

thanks Stan and Alonzo.

Well at least the building that was Columbia 1 and 2 is still up,Being used for a church and the other side a music store,Sure bet alot of Atlanta moviegoers hated to see it gone.

My first job was at this theater (Plitt Stonemont) … I was there in 1981/82. I’ve always wondered what happened to the manager at the time, Lea (I don’t remember her last name). I’m so happy to have found this site and all of the nostalgic comments from former employees. It was such a wonderful theater and a great place to work during that time. I had several good friends who worked in the Hallmark store and the hair salon in the same complex … I really miss those days and am saddened to learn about the missing time capsule and eventual demolition of the building.

REMEMBERING PLITT THEATRES is neat site to join on Facebook.

This opened on June 25th, 1976. Grand opening ad in the photo section. The Henry Winkler and Sally Field movie was called “Heroes” (1977). Sometimes I come across the soundtrack album at record meets.

So I presume “Star Wars, Episode IV: A New Hope” first played there? (I live in Michigan, by the way. Just curious.)

Was the time capsule ever opened in 2000? Is it known where it was buried?