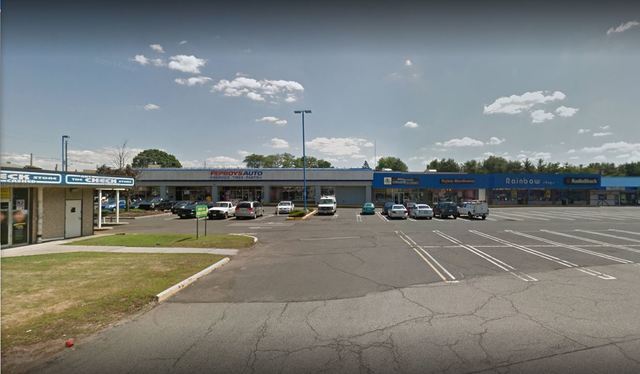 This theatre opened on June 7, 1972 as the Jerry Lewis Twin Cinemas, in the Carteret Shopping Center. The opening movies were George C. Scott in “The Hospital” and a double-bill Disney program of John Mills in “Swiss Family Robinson” & “101 Dalmations”. Each house seated 300 people. Projection was dual projectors with 6,000 foot reels.

This theatre, when first opened, was a great weekend matinee popcorn house. Each auditorium would be packed with kids. The theatre did great business for the first few years, but fell into disrepair.

A sale of the theatre in 1982, and name change to the town’s name did little to help, and the theatre closed for good after the summer of 1984. Today the building is occupied by a Dollar Plus and a Payless Shoe Source.

The Jerry Lewis Twin Cinema opened on June 6, 1972. Opening feature in Cinema 1 was “The Hospital”, Cinema 2 had a Disney Double feature. My dad Joe Pusillo was the opening day projectionist, and worked there until the theatre closed in 1984. The theatre did indeed show many a double feature, or twin bill as they used to call it. Some of my favorites were “The French Connection” & “MAS*H”, “Bullitt” & “Bonnie and Clyde”, and “Carnal Knowledge” & “The Graduate” I would go every weekend with dad to see the movies, up to the time I myself became a projectionist in 1977. The building today is a Dollar Dream and Payless Shoe Store.

Thanks movie 534 for a good story,but i bet you could add a lot more.in other words, write.I enjoy the stories written by theatre people that worked a movie theatre not some blasted 20 plex.

I have read many of your comments elsewhere MikeRodgers. You and I are truely a blast from the past. Even after all these years I still miss this place. (and all the others I worked at)

Yeah, it amazing what the theatre business does to people.I don’t think there is a BURGER KING TREASURES,LOL.

Was sitting around yesterday while I was at work, and it had hit me that it was 43 years ago that this place had just opened. I remember my dad was the opening day projectionist. I still remember the “New” smell the building had. A great little cinema it was.

The shopping center this theatre was in is undergoing a major facelift. When they took down the current façade, the old white aluminum that was on each side of the old marquee made its appearance once more. For at least a few days its a reminder of the old days of the Jerry Lewis Twin Cinema.

rivest266, I remember that day like it was yesterday. My dad was the opening day projectionist.

It was on this day in 1972 that this theatre opened. It was the second twin in middlesex county. My father was the opening day projectionist. Spent that entire summer seeing so many great movies. After the first month they started running double features in each theatre. Good times.

markp’s comment today reminded me to upload a picture of this theatre from its days as the Jerry Lewis Twin Cinema, this being 1976. The young fellow in the blue jeans sort of center is markp btw….