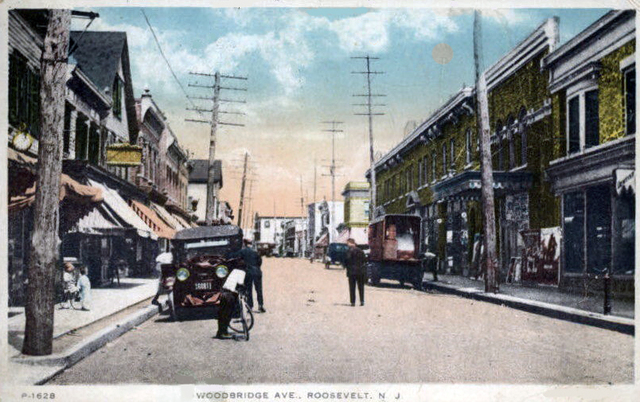 Status for this theatre should now be changed to “Demolished”. The town has taken on a major urban renewal project, and all of the old retail stores on each side of Roosevelt Ave. have been demolished, to make way for condo’s and townhouses. At the end, this theatre was a plumbing warehouse. Demolished in late 2006.

This theatre was originally known as the Crescent. It is listed as that in the 1927 Film Daily Yearbook, seating 370. The location was given as Chrome rather than Carteret, though Chrome is just a section of Carteret. The Crescent was owned and operated by Maurice Spewak, who also operated the other two theatres in town, the Majestic and the Ritz. The Ritz was the newest and largest of the three and built to replace the other two, which he never converted to talkies and closed shortly after the Ritz opened in September 1927.

I couldn’t find any mention of the New Palace or Palace looking through copies of the local Carteret paper of the time, the Carteret Press, which can be accessed online at the Woodbridge public library. They certainly didn’t advertise. Unfortunately my relatives who were around in those days are no longer here to ask about this.

The Crescent was also known for a short period of time in the early 50’s as the Gem Theatre, which opened under that name on February 9th 1952. It was operated by Steven J Babics Jr. Not sure if he was the owner or perhaps the son of the owner of Babics Furniture Store, which was located several doors down from the Gem. It didn’t last very long, ads disappeared from the Carteret Press after several weeks. Here’s an ad announcing the opening of the Gem:

This is a PDF from the Woodbridge Public Library.

I couldn’t find any mention of the Palace in the 50’s, but the timing of the appearance of the Gem probably explains the two different Palace names.

Listed here as the New Palace, this theatre can be dated back to at least July of 1914 when “The Motion Picture News” mentions in its July 18 edition that one A.J. Pfeffer left his position with a theatre in nearby Elizabeth to manage the Crescent in Carteret.

According to the March 11, 1916 issue of “Motography”, Kreimer and Demott, then the owners of the Crescent, sold it to Maurice Spewak. This is the first time Spewak would buy this theatre. Spewak also owned the Majestic Theatre in the Hill section of Carteret, though it is unclear when he purchased it.

Just to note, the 1916 mention lists the location of the Crescent as Roosevelt, while the 1914 mention gives Carteret. The 1927 Film Daily Yearbook, as I mentioned in another comment, lists its location as Chrome. To clarify, when Carteret became a borough in 1906, it carried the name Roosevelt. The Post Office there prior to that was referred to as Carteret, and depending on who did the reporting, either name could be used. Roosevelt changed its name to Carteret in 1922. Chrome is a section of Carteret.

In 1926 Spewak announced he had purchased land in the center of town and was going to build a 1,000+ seat modern theatre. His operating method with the Crescent and Majestic was to change the bill almost daily, and alternating the shows between both his theatres. He considered both of them too small and it a needless waste of labor to operate two theatres at the opposite ends of town, so one might figure he closed them shortly after opening his new house, The Ritz,in September, 1927.

Spewak seldom advertised the offerings of his venues in the local paper, so it’s hard to tell by a disappearance of ads when it closed. I imagine he relied on flyers that were handed out to patrons at the end of each show, like when I attended the Ritz years later (although by then he was advertising regular in the local paper). The last time an ad appeared for the Crescent in the local paper was in the spring of 1925.

Here’s a brief rundown from 1932-36, taken from listings under “Theater Changes Reported by Film Boards of Trade” as reported by The Film Daily, dates are dates published:

May 15, 1932: Palace sold to F.E. Wedge, listed under “Changes In Ownership”. Right below, under “Re-Openings” is the referred to as the Crescent.

I believe this is backwards, The Palace opened April 23, and I’m posting a period ad announcing that in the pictures section.

The October 24, 1934 issue has the Palace sold to M.E. Simon. Simon obviously changed the name to New Palace, as that was its name in the October 26, 1936 issue when it was listed that Simon sold to Maurice Spewak.

The 1945 Film Daily Yearbook listed its name as the New Palace, and noted it was closed.

During the 1936-45 period, there were only 2 ads in the local paper, one in 1938 calling the theatre the Palace, and one from 1945 calling it New Palace. Scattered mentions in the local press in that time frame were for rental events by local groups and, depending on which event, it was referred to by either name.

After a serious remodel, the Crescent reopened again, as the Gem Theatre, in February 1952. By the end of March, ads disappeared from the local paper; I’m not sure how long it stayed open after that. It remained vacant for many years until the late 60’s when a plumbing company moved in. It was razed along with the rest of the Chrome business district in 2006. A condo now occupies the site.

I’ve just uploaded a picture of this theatre from its days as home to a plumbing business. Thanks to the Borough of Carteret Historical Committee for allowing its use.