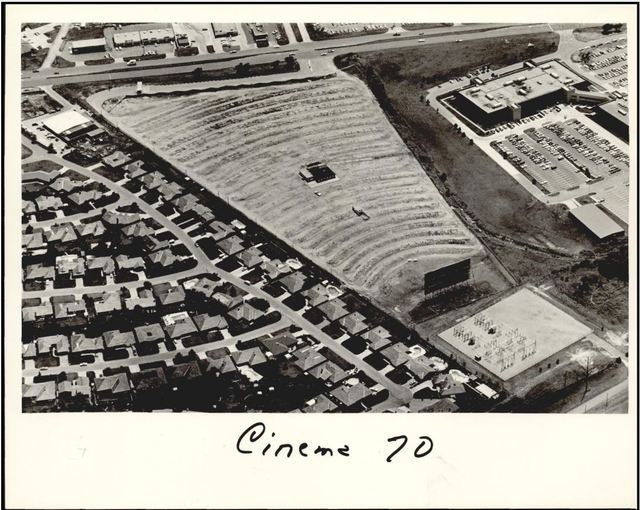 Opened as the Cinema 70mm Drive-In on June 19, 1964 with Dale Robertson in “Law of the Lawless” & Jeffrey Hunter in “Gold for the Caesars”. This was one of the larger single screen drive-in’s in the Oklahoma City area with a capacity of 1,400 cars. It closed in 1981 and was later demolished and the Market Place Shopping Center was built on the site.

Several folks have told me about the exceptional picture quality at this drive-in, and reasonable prices at the concession stand too.
Is Hertz mentioned above the Hertz Rent-a-Car Information Technology Center?

No, it wasn’t where the Hertz IT center is – there is a slight mistake in the description. The IT center was built in the mid-1970’s, I have photos of it in a 1975 OKC Chamer of Commerce brochure. The actual location of the Cinema 70 was immediately east of the Hertz campus, where the Market Place shopping center is today. In fact, the exact address of the Theater – 5501 – is today used by a Hideaway Pizza location (originally a Chili’s) in the SE corner of the shopping center. A simple mistake, since the Hertz address is 5601.

The Cinema 70 was the theater of choice for my family in the mid to late 1960s. My parents and their three young boys would load up the cooler with cheap Cragmont soda and home-cooked burgers, lay down the station wagon’s back seat so we would have room to eventually fall asleep, and head off to what seemed to be the very edge of OKC.

Lots of memories come to mind. On one of our first trips there, we saw “Cat Ballou”; another time the second feature was “Valley Of The Dolls”. I recall my mom saying to dad “Should the boys really see this film?” No worries, even though I struggled mightily to see this notorious film (I knew about it from an article in Life magazine), I fell asleep.

My dad worked for Aero Commander, a private airplane manufacturer, and they sometimes rented out the Cinema 70 for company events, like Auto Bingo. Come around 6pm, everyone in the car gets a bingo card. The numbers are called out on the speakers, and if you get a winner, honk your horn. A man with a walkie-talkie scurries over, verifies the numbers, and you march to the concession stand to claim your prize. Unfortunately, I don’t ever recall our car winning a round.

One July 4, we went to see the space adventure “Marooned.” Just as the film was reaching its dramatic climax, the screen went dark – it was time for the fireworks show! I recall being very perturbed that they couldn’t wait another fifteen minutes and let the film play out.

Often we would leave as the third feature was beginning. I can still recall keeping my eyes glued to the giant screen as we departed; as we turned onto Northwest Expressway, you could see it for at least a half-mile. The echoing soundtrack echoing from hundreds of speakers as we left the parking stalls still resonates.

My last trip to the Cinema 70 was in high school in the early 1970s. During a pouring rainstorm, my brother and I saw “The Exorcist” about a year after it first appeared. After many beers and having to watch between the swipes of the windshield wipers, it turned out to be the best comedy I had seen in some time.

The June 19th, 1964 grand opening ad can be found in the photo section for this drive-in. 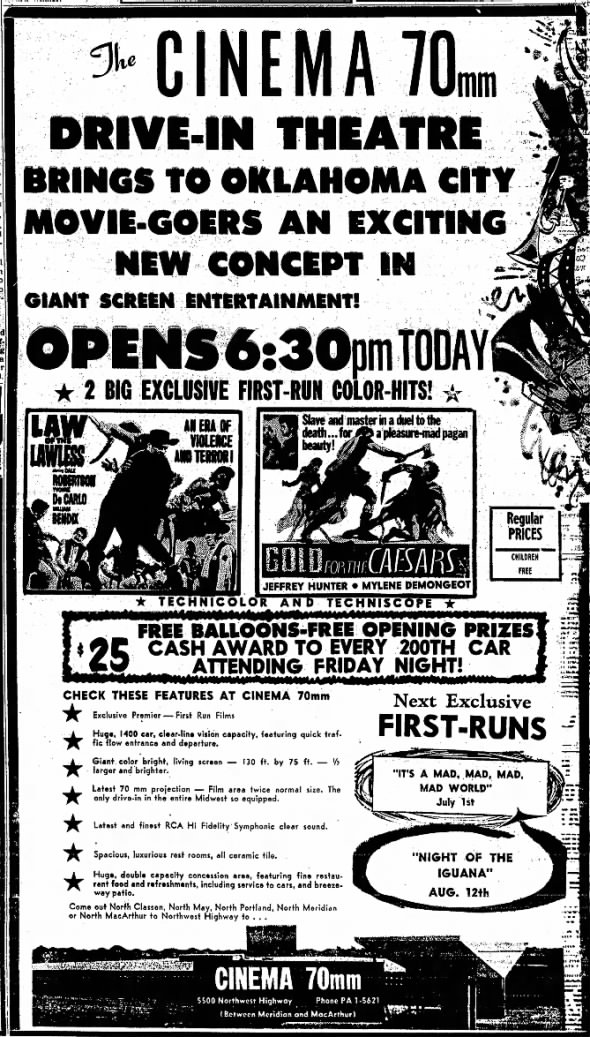 If you look at the layout, the entrance and ticket booth were at the back of the viewing area. Anyone know any other examples of drive-ins like that?

Anyway, the Cinema 70 debuted on the Motion Picture Almanac drive-in lists in the 1967 edition. All MPA list mentions:

1977-79: off the list (but still advertising in The Daily Oklahoman)

With its likely-to-close story on Sept. 27, 1981, The Daily Oklahoman ran an aerial photo that showed the layout looking just the same as in the 1969 aerial; I’m suspicious of that capacity downgrade in 1980. The article said that Heritage Theaters, quoting president George Grube, owned the Cinema 70 but didn’t own the land, which was up for sale.

There are several examples of ticket booths and entrances located at the back of drive-ins along the roadway. You need go no further than the recently discussed Tesuque Drive-In. When they built the widescreen, the entrance was moved to the back of the theater along with the ticket booth.

Another example in Oklahoma is the 51 Drive-In in Broken Arrow. Many drive-ins with the screen on the back of the property would have the entrance and ticket booth along the roadway.

Thanks for keeping me straight, Kenmore. As always, the thing I’m surest of is how much I don’t know.