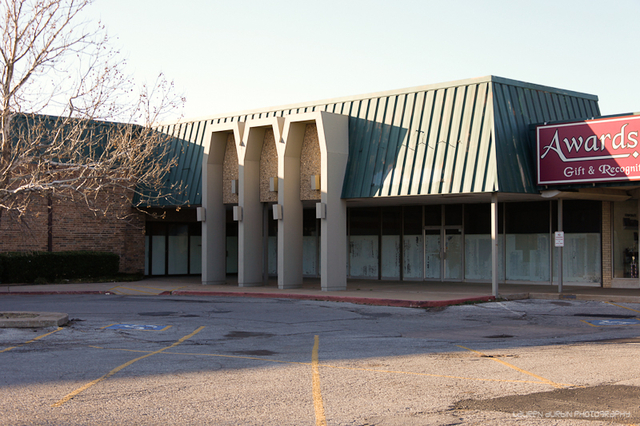 The twin screen Wiley Post Cinema was opened on October 20, 1974. It became the Westpark Cinema from December 25, 1975 screening George Kennedy in “The Human Factor” & Charles Bronson in “Hard Times”. It was closed on June 29, 1986 with Arnold Schwarzenegger in “Raw Deal” & Jean-Claude Van Damme in “No Retreat, No Surrender”. It was demolished in 2012/2013.

Each theater’s screen had a 6 ft. extension concrete stage, which helped with room acoustics.

For whatever reason—either by then-owner Shanbour’s unexplained preference, his subordinates not insisting on an exception, or some obscure Warr Acres municipal code—there was never a marquee of the playing films alongside either the busy MacArthur Blvd. or 63rd streets or on the mall’s sides or even one-sheet posters in other areas of the mall interiors—only a simple listing of “West Park Theater” along with the other mall tenants on a single sign outside, no different than a dentist’s office. Customers were expected to read a newspaper, call the theater, or leave their car and go inside if they wanted to know what was playing.

OU’s legendary football squad was sometimes transported en masse to the West Park from Norman, Oklahoma—almost an hour long drive—in case there was a film playing they wanted to see but unavailable closer to campus. Ushers were strictly instructed not to interrupt the team if they got a bit rowdy during a film’s runtime, as it was felt the movie was a way for them to let off steam before the next game. The boisterous admixture of yelled punchlines, earsplitting whistles, seat-slamming, and competitive bursts of intergroup laughter was particularly noticeable during a screening of Sylvester Stallone’s 1978 Hell’s Kitchen wrestling melodrama PARADISE ALLEY, especially the climactic match between actors Lee Canalito and Terry Funk, where the resultant Dolby Atmos-level cheering literally shook the outside lobby. Afterwards, several of the players nicely took the time to meet & thank employees and sign autographs.

Shanbour’s ushers were always issued a long clipboard with an extensive printed call sheet (other company employees had no equivalent itemized form) they were required to sign into and send back to the main office nightly along with their doorway ticket stubs, confirming they’d hourly-inspected both the bathrooms for cleanliness and the auditorium’s temperature gauge readings (using an illuminated flashlight on both room’s sides while the film was running). On Easter evening 1979, in commemoration of the holiday, each doorman donned oversized floppy jackrabbit ears during the 8pm auditorium check.

Tapes on the West Park’s 8-track player for broadcast into both theaters' sound systems during intermissions included soundtracks to the films GREASE and THE BUDDY HOLLY STORY, Gino Vannelli’s “Brother to Brother,” and Chuck Mangione’s “Feels So Good.”

Hoboes were an especially vexing problem to OKC retail business owners during the 1970s, as a huge downtown urban renewal program begun in the late 1960s spearheaded by Mayor Patience Latting not only destroyed several longstanding cinemas there such as the Cooper Cinerama and Criterion (which until then had provided comfortable sleeping places for them when they couldn’t get into the YMCA), but also pushed bus stop/soup kitchen vagrants more into the suburbs and near-central districts. The West Park’s own regular would have to have been a tallish grey-haired streetperson in his 50s always wearing a brown corduroy jacket even in the hottest weather, who would weekly walk unaccompanied to the mall carrying the latest copies of Variety or the Los Angeles Times, go straight to the theater lobby to purchase a soda, and then cheerily chat up the entire staff for up to a full hour while never buying a single ticket. It is not known if the new West Park owners in late 1979 might have asked him to move on or if he simply moved on his own, but the same vagrant was later a less-regular fixture at the Continental Theater some 3 miles east of the West Park a year or two later—still walking in off the street, still carrying his newspapers, still buying soda, still uninterested in watching a movie—and finally at a major chain bookstore next to the Continental that opened up in the mid-90s, where he could be seen buying his newspapers until the early 2000s. To the last known sighting, he was still in the exact same brown corduroy jacket he was wearing in 1978.

An entire first-night screening’s box office take for Bruce Lee’s ‘last’ official film GAME OF DEATH (a cobbled-together action film incorporating 30 minutes of previously-unseen Lee footage) was ruined when a well-meaning but naïve West Park usher inaccurately believed the film was supposed to be the competing posthumous Lee-written film CIRCLE OF IRON starring David Carradine (which had been released 6 months earlier) and convinced the manager to have the marquee for Auditorium 2 changed to the wrong title. When customers walked up to the theater for the first 7pm showing and saw the completely different listing from the advertised title many of them walked off shaking their heads or asking the staff if they had a ‘Bruce Lee’ film or not showing (the mistake was corrected during the second show).

By early 1978 it was felt operational standards at the West Park had slipped so badly that an emergency mandatory group meeting (excluding janitors) was scheduled for a Saturday morning. Groggy employees were greeted with a host of citations including tardiness, fraternization with non-employees during business hours, incorrect inventory (concession girls had been required to count items such a soda cups weekly), and popcorn literally coming out the color of bright red orange. In conclusion the staff was ordered to sign a hand-written attendance sheet hanging next to Auditorium 1’s projector verifying they understood the meeting’s new goals. As the list hung largely unsigned for week after week, one of the projectionists—perhaps tiring of the list hanging in the area of his equipment—added signatures of several ‘West Park employees’ solemnly pledging to the cause of flawless theatrical presentation; the names included “I.M. Broke” and “I.M. Dedd.”

Things Farris Shanbour didn’t like: 1) Doormen drawing a fairly accurate picture (including back-lighting) of the ET from CLOSE ENCOUNTERS OF THE THIRD KIND giving the Kodaly hand signal on the ticket stub sack for the film before it was returned to the main office that night (there was a direct reprimand for this). 2) Candy counters left unlocked upon nightly concession closing (his comment was, “I want it ALL locked up.” Trivia: Shanbour’s theaters carried Mars Candy products, not Hershey.) 3) An employee using napkins and magic markers to create the jagged hand-wrought wording “Pickles-$1” on the concession board when the sour treat had been added to the menu (there was no other indication about their price). It should be remembered that the swarthy theater owner, in moments of sell-out largesse, would permit a doorman to drive his luxury Lincoln Continental to the nearest gas station for a fill-up.

Perhaps the raciest film the West Park or Shanbour’s sister theaters ever exhibited was the British 1971 Philip Saville adultery drama SECRETS, which was not released in the US until 1978 to capitalize on star Jaqueline Bisset’s recent publicly notorious wet t-shirt mania from Peter Yates' film of Jaws author Peter Benchley’s THE DEEP. Blown up from a 16mm negative, the end of its second act features a completely uncensored, heated scene of copulation between Bisset and co-star Per Oscarsson. The scene was so graphic that several members of the staff would time their 15-minute shift breaks to it.

The last marquee under this theater’s original Oklahoma Cinema Theaters/Farris Shanbour ownership was Thursday, August 2, 1979, featuring Philip Kaufman’s film THE WANDERERS and Bill Murray in MEATBALLS in either auditorium, transferring to its new owners the next day with identical programming. It was able to survive as a full-price house until the mid-80s, becoming a dollar theater. The West Park closed for good on Sunday, June 29, 1986 showing Arnold Schwarzenegger in RAW DEAL and the debut feature of Jean-Claude Van Damme, NO RETREAT, NO SURRENDER.

The Wiley Post Cinema was named for the aviation enthusiast and the airport that was about three miles away. Galaxy Theatres’ twin-screen cinema lifted off on October 20, 1974 (ad in photos) at what was called MacArthur Mall in Warr Acres when it opened that year. It launched with “Snow White and the Seven Dwarfs” paired with a Three Stooges short and “Young Guns of Texas” on a repertory 45 cent opening day. The MacArthur was a minor mall and would struggle at the outset. Galaxy Theatres' portfolio was soon in the hands of the Oklahoma Cinema Theatres Circuit and the Wiley Post appears to have been grounded as churn was afoot at the MacArthur Mall.

The Westpark was closed on June 29, 1986 with Arnold Schwarzenegger in “Raw Deal” & Jean-Claude Van Damme in “No Retreat, No Surrender”. The Westpark Mall reached greyfield status as retailers bailed at the end of ten-year leases. The mall transferred to new operators in 1993 who got one anchor - a Dollar General - which carried it through for its next 20-year cycle. Nearly empty, the Westpark was sold in 2012 for $2 million. The former theater and former MacArthur turned Westpark Mall was torn down and is now an all outdoor shopping strip that featured a popular WalMart Grocery Store.