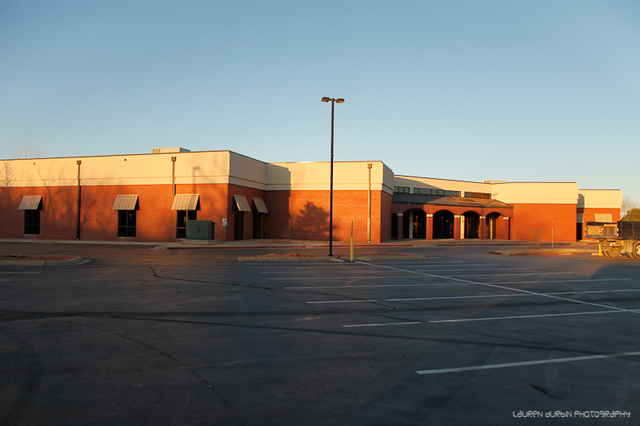 I think this was a General Cinemas theatre back in the 1990-92 timeframe. I also think it was still operational as an independent when I was last in Oklahoma City in 2004.

Correction to the independent comment. It looks like it is now a member of the Wallace chain.

This theater closed sometime around the beginning of 2008. It was open before Christmas, but around the 15th of January I noticed the marquee no longer displayed titles. I imagine it just didn’t reopen for 2008.

This theater should be updated to closed. The renovation into office space has been completed, but the building is still vacant.

Modern shots of the Brixton Sqaure Cinema 8 can be found on this fun site,
http://www.roadsideoklahoma.com/node/567

This theater was first General Cinema, a Hollywood Theater, then a Wallace Theater. I worked there in the early to mid 2000’s. Many fond memories of getting to watch free movies, and having many movie posters. This theater was was never upgraded to theater seating and the interior was probably no different than opening day but just aged. It was a neighborhood theater and I kind of wish they would go back to less than 10 screen theaters. Even though the pay wasn’t good, and we never were paid OT, it’s still one of my favorite jobs. FYI, If you ever wondered what those lights above the box office meant in lobby, that told us when a movie has started if green, yellow if there’s a problem, and red if the credits are rolling.

Brixton Square Shopping Center opened theatre-less in 1985. General Cinema announced this as one of several other local projects in March of 1987. The theatre was designed by The Architectural Group in Mobile, Alabama or TAG. It featured 8 theatres with 2,200 seats. The theatre launched December 11, 1987.

As the megaplex era was beginning, plans in 1997 called for a Regal 16-screen theatre that would dwarf its Crossroads venue, a 24-screen that would destroy its Quail Spring multiplex, a 20-screen Cinemark location and a 16-screen downtown multiplex that could potentially siphon additional business from its ten-yeaar old theaters. General Cinema decided to cut bait dropping the Brixton Square 8 along with its Quail Springs, Penn Square Mall, and Crossroads 8 locations on August 10, 1997.

All of the locations were resumed by Hollywood Theaters on August 15, 1997. In the megaplex world, the former General Cinemas multiplexes were plucky survivors and the Brixton Square 8, rumored to be closing in 2001 lasted with Hollywood Theaters - and a brief period with the Wallace Theatres nameplate in 2006 before returning to Wallace’s Hollywood Theaters moniker - until its January 2, 2008 closure.