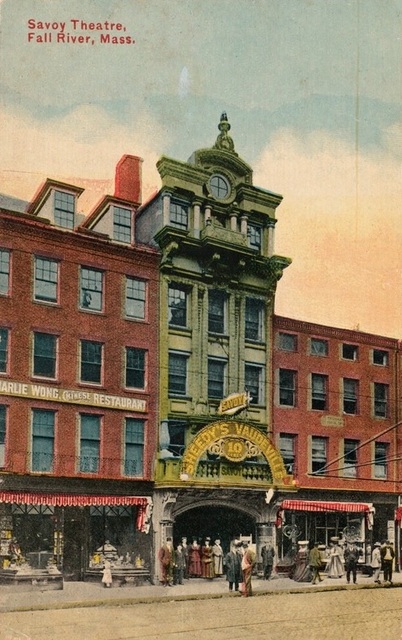 The Savoy Theatre was built and opened in 1905. This movie theatre was in existence in the World War I era and had two balconies. It was renamed Rialto Theatre around 1921. It was destroyed by a fire in 1928.

On April 30 of 1918 there was an explosion of a film magazine on the second balcony of the Savoy Theatre. According to newspaper reports there was considerable panic among members of the audience who rushed for the exits. The only person known to be hurt was Stephen Rose, the film projectionist, who sufered burns on his hands. Several women fainted or became hysterical when a burst of flames enveloped the upper part of the balcony. A portion of the front and side of the booth was torn away. There was some damage to the ceiling of the balcony. One woman jumped from the second balcony to the floor of the theater! The explosions and screams attracted persons outside who ran to the scene but were met with crowds attempting to exit. Theatre employees attached lines of hose and contained the fire without the aid of local firemen.

The above incident, whose description is paraphrased from a contemporary news report, suggests an example of a fire started with highly-flammable nitrate film, the industry standard for many decades until safety acetate-based film was introduced. A similar fire in a theatre in Washington, DC in the 1920s caused a number of deaths, but no one besides the projectionist was hurt here. The scene reminds us of the nitrate film fire in the Italian movie “Cinema Paradiso” where the projectionist Alfredo is burned and loses his eyesight.

Here is a photo of the Savoy, circa 1911. Its address was 28 North Main Street, which would have placed it near or at the site of the later Durfee Theatre.

Here is a photo of the Savoy Theatre.

As the Rialto, this theater is listed in the 1927 Film Daily Yearbook as having 1500 seats and open daily.

My husband found an old ticket stub from the Savoy in a wall from a house he was gutting out. It was from the month of January but no year. Any suggestions on where I can look to find the year and maybe see what was playing?

A history of Fall River published in 1908 says that William Durfee built the Savoy Theatre in 1905. Other sources indicate that the Savoy was designed by local architect Joseph M. Darling. His son, William S. Darling, and daughter, Maude Darling Parlin, who took over the family firm in the 1920s, designed the Durfee Theatre, which was built on the site of the Savoy after the earlier house was destroyed by the 1928 fire that wiped out much of Fall River’s business district.

The Savoy had been renamed the Rialto by 1921, which is how it was listed in the city directory that year.

The Savoy was considered a class house for the presentation of theatre, concerts, and later, major films of the era. On February 13, 1907, the Boston Symphony Orchestra performed here under Karl Muck in a program of Goldmark (Overture to Sakuntala), Grieg’s Piano Concerto with soloist Olga Samaroff, and the Brahms Symphony No. 1.

For the week beginning August 30, 1915, the Savoy presented the city premiere of D. W. Griffith’s epic film The Birth of a Nation.