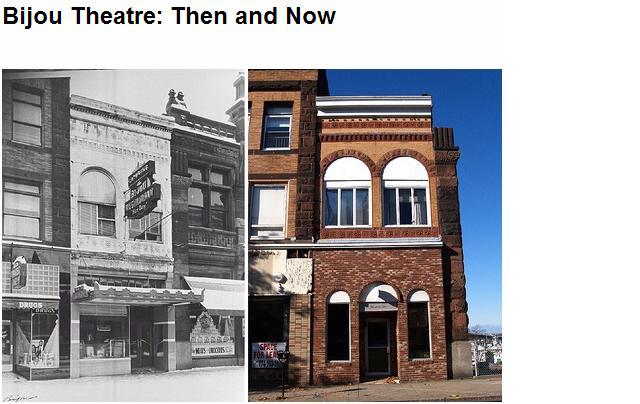 The Bijou Theatre was opened prior to 1904. There is a listing of this theatre in the 1929 Fall River city directory. The front of the building still stands in 2021, but the auditorium was demolished long ago.

Fall River theatre manager, theatre historian and commentator wrote in a February 11, 1990 Fall River Herald piece in the column “Under the Marquee” the following memories of the Bijou:

“The Bijou Theatre (capacity 1400) was located on the west side of North Main Street between Pine and Elm Streets. The lobby of the theatre is still there – it is now the office of the Greater Fall River Community Development Agency. I was very familiar with the Bijou because I passed its side four times a day as I went up Pine Street to Sacred Heart School. The Bijou had a large billboard on its Pine Street side which advertised its current attraction. It also had a slogan on it: ‘Bijou Theatre – Home of Super Pictures.’ Since I was very young and couldn’t read very well, I thought the sign read” ‘Bijou Theatre – Home of Supper Pictures.’

“In my vivid imagination I thought when you attended the Bijou that you got your supper with the show (I told you I wasn’t smart!).

“On my way home from school I always stopped in the Bijou lobby to see the stills of the film playing there. I remember seeing glosssies of Norma Shearer in The Trial of Mary Dugan and Lon Chaney in Laugh, Clown, Laugh. I only went to the Bijou once to see a silent picture called Slide, Kelly, Slide starring William Haines. I recall the organ blaring out ‘Girl of My Dreams.’

Sorry, I neglected to given the name of the person who wrote the above recollection. It was John McAvoy.

A February 24, 1933 Fall River Herald article (replete with extensive detail not included here) reported that the Bijou had been sold at auction the day before at $7,000 to Nathan Yamins, who announced the the theatre entrance at 162 North Main Street would be remodeled for business purposes and that the auditorium itself on Durfee Street would be razed for a public garage and a gasoline station.

For the previous thirty years the theatre had been used for theatrical productions as well as sporting events. The Bijou had been constructed as a modification of the original Casino which had been there and had been the sports center of the community. The Casino had been built in 1895 and had a polo-rink/skating-rink (47 x 100 feet), pool and billiard tables, bowling alleys, banquet and assembly rooms. Ephraim E. Wood of Boston, builder of the Casino, had been a big polo enthusiast. Polo matches with teams from area cities such as Providence, Pawtucket, New Bedford and Salem were presented. The Casino was used too for indoor baseball games. In 1903 the Casino was restructured and rebuilt so that it became the Bijou. Interestingly, the bowling alleys remained.

The Bijou finally opened in 1904, with an incomplete stage roof. Actors had to wait in the wings with umbrellas before going on! In a show with Eph Thompson’s elephants, the animals had to make their entrance to the stage by entering the lobby and parading down the aisles of the theatre. Vaudeville shows became part and parcel of the Bijou presentations. The theatre seated 1,800 people. There was for a time a vaudeville war between the Bijou and the Savoy (down North Main Street a bit). In 1915 and 1916 the Bijou was the home of Loew’s Vaudeville with Louis Boas as manager. The best movie attractions came here and to the nearby Savoy. The Bijou was the second theatre in New England to be wired for the showing of sound movies (the first may have been the Majestic in Providence). The end of the Bijou can be attributed to the end of the Savoy in the fire that raged two blocks away in 1928 and destroyed that theatre, for out of the ashes of the Savoy would emerge the grand Durfee, which would overshadow the Bijou and precipitate its demise after the elegant new showplace opened in 1929.

I have a postcard showing the Bijou Theatre. The main focus of the card is the First Congregational Church on the corner of Main Street and Elm Street. A card on another site shows 1914 as a postmarked date. Another 1906 postmarked card shows the church, but the Bijou is not signed. The church has been demolished, but the building next to it and the Bijou entrance beyond that still exist.

my Grand Uncle was Louis Boas. he managed many theaters in FR,Providence and Boston. I have wonderful pictures of him with his Vaudeville acts. my Grand Aunt(his wife) among them. she was a Soprano and they traveled all over the world where she sang for heads of State,etc. Louis went on to form a partnership with Marcus Loew. they went on to open more theaters and make movies after that.

The Bijou Theatre was designed by local architect Joseph M. Darling, possibly with his son, George S. Darling. The Bijou was in operation by 1904, and I’m not sure when the firm of J.M. Darling & Son was formed (it was listed in the city directory by 1918.) J.M. Darling and son designed several other theaters in Fall River, and the successor firm Darling & Parlin designed at least two more.

The part of the building which housed the Bijou’s entrance is still standing, but the auditorium is long gone.