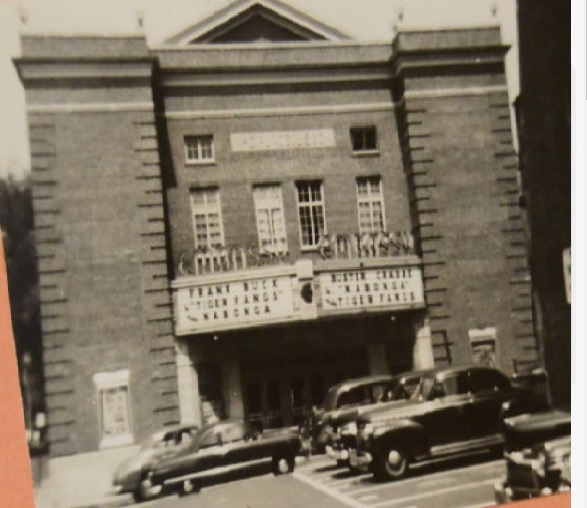 One of the number of lost theatres of Fall River. The Embassy Theatre was opened on March 7, 1947, the opening film being Nancy Coleman in “Her Sister’s Secret”. It was designed in a Neo-Colonial style. Seating was provided in orchestra and loge levels. A feature of the decorative scheme in the auditorium were a pair of painted murals located on each side of the proscenium opening. These measured 20 x 20 feet, and depicted a countryside scene, the work of the Novelty Scenic Studios.

Dick, I’ve been looking at Fall River Herald-News on microfilm and may be able to determine that at some point…or at least when it closed.

The Brazilian film O Cangaceiro, a kind of bandit-western, played here in June of 1955, perhaps in a Portuguese-language print, since the ad contained some enticement in Portuguese for the local ethnic community. It was weirdly paired with The 5000 Fingers of Dr. T. The week before had brought Rossellini’s Woman paired with Shamed, a sensational Italian double bill of the time dubbed for wider release and labeled FOR ADULTS ONLY. Earlier, in May, the Embassy had an early Mastroianni piece (he was then unknown) with Eleonora Rossi-Drago: SensualitÃ …“it drives men wild.”

Fall River never seems to have had an art house, although the more popular or more exploitable foreign films played around town in generally dubbed versions. The Swedish Elvira Madigan, for example, was booked at the Durfee in 1968.

In the late ‘40’s and well into the '50’s, my friends amd I attended movie matinees every Saturday. We rarely went to the Embassy and I suspect that was due to their catering more to adults in their selection of films. Supporting this conclusion is the fact that during that period the Embassy is the only Fall River theater I recall being closed by authorities for showing films that violated the old Blue Laws. However, the films managed to show for two or three days before the authorities could view the film and effect closure. The trick was to go to the first showings before that happened. My friends and I did that in the case of “The Moon is Blue”, the first film to use the word “virgin”. We were disappointed and couldn’t understand what all the fuss was about but a day or two later police closed the theater.

The Embassy opened on March 7, 1947 and drew approval for owner William C. Purcell Sr. Ther opening night audience included Mayor Grant. Rev. Frederick M. Brooks Jr., rector of the Church of the Ascension, offered invocation. The first program was Her Sister’s Secret with Nancy Coleman, Margaret Linday and Philip Reed, directed by Edgar G. Ulmer. The policy of the theatre would be continuous performances from 10:30 A.M. Seats could be reserved daily, except Sunday, after 4:30 P.M.

The theatre had an intimate lobby, embellished with red and gold carpeting, and walls covered in blue damask. There were twin staircases on opposite sides of the lobby, with an octagonal window over each. The Embassy had a small but elegant balcony. At 813 seats, the theatre was considered small in those days. It is generally said that the place had a cozy charm.

One of the biggest hits at the Embassy was the 1948 Johnny Belinda with Jane Wyman, who won an Academy Award for her performance. The film had played for a week at the Durfee, moved over to the Capitol for another week, then moved to the Embassy. After playing a week here, it was held over for another. That made it the longest playing movie ever in Fall River up to that time, four weeks.

The Embassy, like other theatres, had promotional gimmicks. They gave out dishes, later phonograph records. There were weekend “Small Fry Matinees”. Children generally walked to the theatre, often followed by their dogs. The dogs would then patiently wait patiently outside the theatre for their masters to come out at the end of the show!
(Synthesized from Fall River Herald articles)

Gerald DeLuc The Academy Theatre began as a Vaudeville Theatre where many of the more famous stars of the 40’s performed.

There is a MGM Theatre photograph and Report form for the Embassy, with an exterior photo dated May 18, 1949. The theatre had an impressive facade. Near the top is engraved “—– & Son” which seems to suggest a previous occupant. There was a 2-sided marquee on which were posted the movies: Buster Crabbe in “Nabonga” and Frank Buck in “Tiger Fangs”. The Report states that the Embassy was not a MGM customer, that it was built (about) 1945, was in Good condition and had (about) 850 seats.

YAMINS CIRCUIT ACQUIRES EMBASSY IN FALL RIVER
FALL RIVER – Nathan Yamins, who operates six theatres in Fall River, added a seventh to his circuit when he took a long-term lease on the Embassy. William Purcell, the owner, rebuilt the 900-seat house from a former church and operated it for over a year. The Yamins houses are the Empire, Durfee, Center, Capitol, Park and Strand in Fall River, and the Dartmouth Open-Air, which he operates with the Interstate circuit.

Portuguese films at the Embassy, Capitol. Item from Boxoffice magazine, October 29, 1955:
“Sponsors of Portuguese presentations have selected the stilled Embassy Theatre to present productions on Sundays of each week for an indefinite period. Portuguese films are offered weekly at the Capitol, which now resumes its seven-day policy.”

“Showing of pictures in three dimensions has been started at the Embassy Theatre, where admission until 4:30 p.m. is 25 cents."
(Item in Boxoffice magazine, September 12, 1953.)

My father, Gilbert Hemenway, was a projectionist at many of the New Bedford area theaters. In Fall River he worked at the Plaza Theater for some years, and The Embassy Theater was a fairly brief stint for him. I remember seeing Born Yesterday there. I was impressed by the size of the booth. It counted six rooms. As a small kid, I probably considered a large closet to be a room. My father came home early one night because the cops raided the theater for showing East of Eden. The Fall River Archdiocese was said to be behind the police raids.

Read the Plaza Theatre entry and find out how my father was a joker.

Gerry, I can not find the Newport Theater (Rhode Island)listed here. It was on the west side of the street and there was another theater across the street. If anybody has any information, let me know.