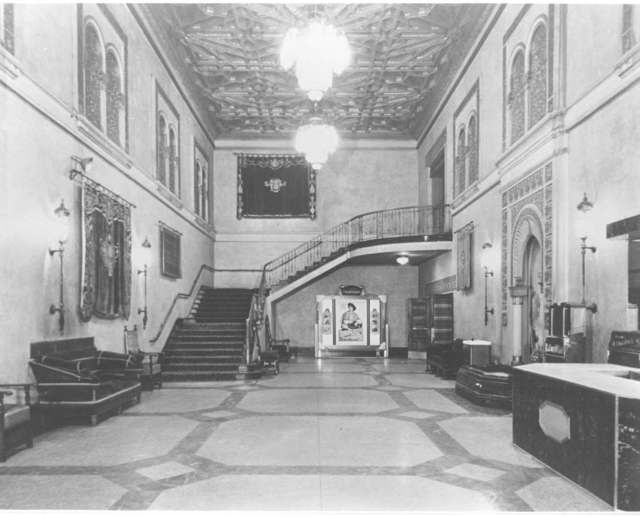 The Durfee Theatre, generally considered the finest in the city’s history, had its grand opening on August 29, 1929. It was a year and a half after the February, 1928 multi-block fire that destroyed much of central Fall River, including two theatres, the Rialto Theatre (formerly Savoy Theatre) and the Premier Theatre. This new theatre was built on the same land previously occupied by the Savoy/Rialto. Its builders were William Durfee, Sr. and Nathan Yarmins. It was owned by the Durfee family and leased to Yamins Theatrical Enterprises, Inc. The opening attraction was the Marx Brothers film “The Coconuts”.

The architectural scheme imitated the Alhambra Palace near Granada in Spain with its Moorish motifs. The colorful tiles in the lobby were imported from Seville. The foyer, with its sunken fish pool and and gleaming tapestries hung from metal rods, was a copy of the Alhambra courtyard. The foyer floor was of black and gold marble, Levanto marble, and pink Tennessee marble.

The stock market crashed a month after the theatre opened, but the place was very popular with local residents and was deemed “the theatre” in Fall River, the city’s class act. A spiffy usher corps escorted patrons to their seats. Stage shows and films were the mainstay at the time and when the theatre began to hit a slump during the worst of the depression, “dish night” was introduced for Wednesdays and Thursdays. For an extra admission supplement, folks could add to their complete dish set collection.

On December 7, 1941 the movie “Birth of the Blues” was interrupted and the manager requested all military personnel present to return to their bases. Noisemakers and paper hats stored for the 1942 New Year’s Eve show were thrown out because they were labeled “Made in Japan.”

The Durfee Theatre seated about 2,229 in the 1930’s, with 1,391 seats in the orchestra, 1,000 seats in the balcony and premium-priced loge. The loge could be reserved. The Durfee Theatre claimed to be the only theatre in the East, besides Radio City Music Hall, that offered some reserved seats each night. The theatre was also used for graduation ceremonies for Durfee High School and Bristol Community College.

In April of 1963, Edward W. Lider, executive director of Nathan Yamins Theatrical Enterprises, inaugurated a policy of Broadway shows at the Durfee Theatre, although movies continued to be shown up to its closing in 1971. Among the stage shows were “The Sound of Music”, “Man of La Mancha”, “Hello Dolly”, “Mame”, “Camelot”, “Fiddler on the Roof”. Busloads of patrons would come from as far away as Connecticut to see the performances at the Durfee Theatre. The last stage show was “1776”. The movie version of “The Sound of Music” played here in 1965 and set a local record at an uninterrupted 37 weeks. It was the longest-running, highest grossing, most attended presentation in the history of the theatre. An evening of nostalgia with silent film actress Lillian Gish took place on November 9, 1969, when the star presented some of her early silent films to the audience.

The very last bill at the Durfee Theatre was a Disney combo, “Scandalous John” and “The Barefoot Executive” on September 7, 1971. There was an audience of 25 people. The operators did not renew their lease. The next day the projection and stage equipment were dismantled. The Durfee Theatre was a victim of economics and a trend that had produced the closing of many of the country’s theatres. It was also the victim of a lack of imagination and resolve, and one can envision in it today, had it survived, a carbon copy of the success of the Providence Performing Arts Center that evolved out of that city’s Loew’s State Theatre.

The Durfee Theatre was razed in September and October of 1973. A bank occupies the spot that once held Fall River’s greatest cinema/theatre treasure. The city now has none of its former movie palaces. An effort is being made now to restore the former Capitol Theatre, which has continued to exist in dormancy as a furniture store for several decades.

(Some observations synthesized from several articles in the Fall River Herald.)

Thank you for the direct link,Chuck. You’ll have to show me how to do this sometime. I plan to add photos of other Fall River theaters to my site, and would like to link them to the specific theaters. (I have already added photos of the Empire Theater)

jmed…These are incredibly good pictures. Many many thanks! I can’t wait to see links to pics of other Fall River theatres posted on their pages.

The actual date that Lillian Gish appeared at the Durfee to show some of her films was November 5, 1969. The Fall River Herald had an ad that day which said:
ON STAGE
Tonight at 8:30 P.M.
LILLIAN GISH &
THE MOVIES
with Miss Gish in person and in a program of rare early films.
A dramatic and exciting performance.
See Way Down East, Blood and Sand, Broken Blossoms, Keystone Cops and a Host of Others. You’ll Roar at Chaplin and Keaton. You’ll Thrill to Valentino —– An Evening of Unsurpased Fun and Delight.
(Note that the Fall River Library clippings-file has an abundant amount of material on the Durfee in its “Theatres” folder.)

The Durfee Theatre opened on August 31, 1929 and was termed a “showpiece” among New England theatres and was said, perhaps hyperbolically, to be unrivaled east of Chicago. It is certain that no other Fall River Theatre surpassed it in beauty, and its loss is one of the saddest that ever befell the city. The first film attraction presented was The Coconuts with the Marx Brothers. The Spanish-Moorish decor was modeled after the Alhambra Palace in Spain, including the ceilings, wall-hangings and drapes. The lobby was lavish, had a beautiful staircase, a marble pool for fish on the ground level and an elaborate chandelier. A great deal of information on and many memories about this magnificent lost theatre have been found in the clippings file at the Fall River Public Library and will appear in these pages over the coming weeks.

Here is an old postcard booklet image from the 1930s or 1940s showing the relationship of the Durfee to Fall River City Hall.

According to a recollection of manager John McAvoy, the Durfee’s biggest hits were The Sound of Music, which played for 37 weeks, Boys Town, and Snow White and the Seven Dwarfs, which played in 1938 to many sold-out showings.

I grew up in Fall River, and was privileged to have a grandparent who took me to the movies every Saturday. Often to the Durfee. Even as a child I was struck by the grandness of the place. The marble, the gold fish pond, even the velvet rope that separated the lobby from the area up stairs. Any movie I saw at the Durfee was special, felt like an event, due to it’s accoutrement and the relative seriousness it’s employees gave their jobs.

I’d stair at the goldfish, and marvel at the surroundings, as much as the film. I miss the Durfee, and what Fall River was.

Thank you so much mr DeLuca for the photo links.

According to a biographical sketch in The First American Women Architects, by Sarah Allaback, the Durfee Theatre was designed by the local architectural firm Darling & Parlin. The principals of the firm were George S. Darling and his sister, Maude Darling-Parlin. She was one of the few women practicing architecture during her era, having joined the family firm, which had been founded by her grandfather, in 1921.

The firm designed many of the buildings that were erected in Fall River following the 1928 fire which had destroyed much of the city’s business district. Several other theaters in Fall River were designed by members of the Darling family, both before and after the fire. Among them were the Rialto (Savoy), Capitol, Strand, Bijou, Park, and Empire Theatres.

PHOTO OF DURFEE THEATRE, 1941, IN MGM REPORTS Thanks to Theatre Historical Society of America.

This was the theater my mother went to when she was a kid.

I showed her this, and she remembered it like it was only yesterday.