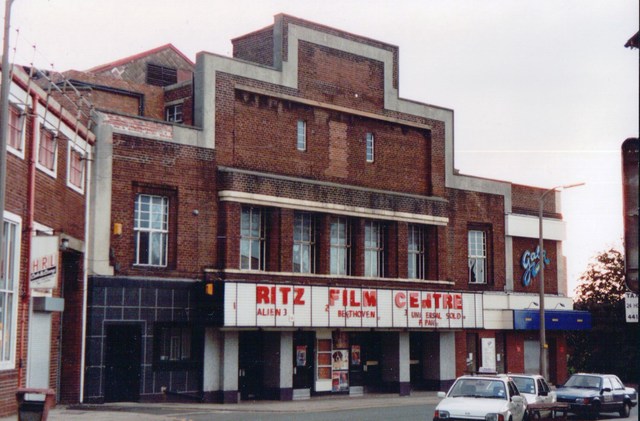 This Art Moderne style gem was open for 60 years(1938-1997). It closed due to the building of a new and devoid of character multiplex, and was subsequently demolished.

The Ritz Cinema opened on 7th March 1938 and was part of a building project already begun by Union Cinemas, taken over by ABC Cinemas.

They re-opened as the Ritz Cinema (by an independent) on 4th January 1985 and were successful until a new Virgin multiplex opened in the town and despite cutting prices to attract more patrons, the Ritz closed on 10th April 1997.

Sadly, the building was not deemed worthy of being granted a Listed status and was demolished in 2002.

Photo’s I took in 2004, the year before demolition:
View link

More about the ABC Ritz here :–

The Beatles played there a photo is in the photo section.

1977 auditorium shot of the ABC Ritz uploaded. This was taken from the circle crossover just before the conversion team moved in.

The reopened building was, as in the case of Plymouth, Chester and Aldershot, a poor affair with two cinemas in the circle and a third screen in the former restaurant. This method of subdivision enabled Bingo to reign supreme in the stalls area.

EMI, like Rank, often did ‘drop wall’ conversions some of which, like Halifax and Northampton, were neat affairs retaining all the theatre’s impressive features with the ‘minis’ occupying only the circle under-hang. Sometimes,as in the case of Northampton, the front stalls seating was retained and the stage continued to be used.

It was a great pity, therefore, that the so called ‘Social Club’ division were not told ‘where to go'in the case of Wigan etc as their occupancy of the stalls and stage areas ensured that the results, at least as far as cinema was concerned, were very sorry states of affairs indeed.

At least Wigan had no Rank opposition but in the case of Plymouth and Chester where Rank had very fine theatres , ABC, having had equally impressive venues with full stage facilities, were then left well and truly in the shade.

Sadly, when viewing JoeBGSU’s photo’s it seems demolition of this once fine building was merciful following the uninspired tripling of the ‘70’s.