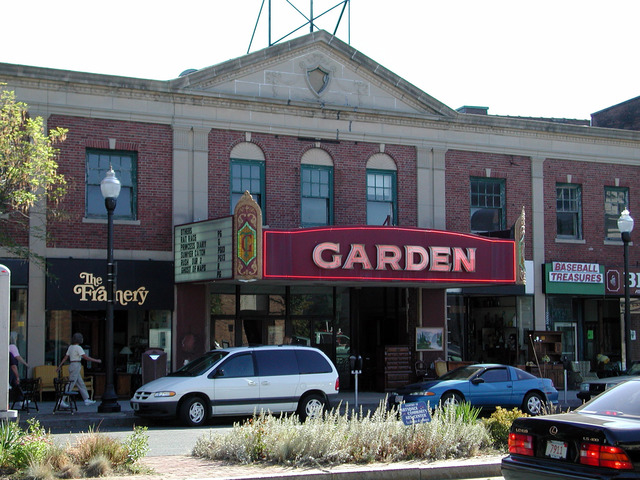 The Garden Theatre was a small town single screen gem when it was first built in 1929. Murals depicting the hills and gardens of the area were painted on its walls which also featured ‘buildings’ and ‘star’s twinkled in its ceiling. Later, under the ownership of Western Massachusetts Theaters, the movie house was carved into six underwhelming screens in 1986.

Despite its closing in 2000, Richard Goldstein of Western Massachusetts Theaters re-purchased the Garden Theatre from the city of Greenfield in February 2001.

The city had previously taken over the now six-plexed theatre due to unpaid taxes. The town, which repaired and operated the theatre while Goldstein was preparing to pay off the tax burden, was reluctant to return the theatre to Goldstein because of his poor treatment of several theatres in the area.

Of all of the Western Massachusetts theatres, only the Garden Cinemas has remained in operation as a movie house. The Rivoli, Amherst, Calvin, Showplace, and others have either been converted, demolished, or sold.

According to their website, even they do not know what happened to the organ. They estimate conservatively they draw 90,000 patrons per year.

According to this article in the Greenfield Recorder (http://www.recorder.com/story.cfm?id_no=8307371), the owners are putting the cinema up for dsale, which could delay a possible renovation of the building into a performing arts center. It’s a complicated scenario, but hopefully something gets worked out. A renovation could possibly move five of the cinema screens into neighboring buildings and restore much of the original auditorium.

This may be slightly off topic (my apologize), but I do feel it is important as it does relate to the Greenfield Garden Theater: The Goldstein Brothers built another Colonial Atmospheric theater similar to the Garden Theater in Athol Massachusetts called the Capitol. The theater opened in 1930 (a year after the Garden) and according to the Athol newspapers was much more elaborate then the Greenfield Garden. (They also stated the residents of Greenfield would be jealous of the Capitol.) This theater was a smaller non-identical sister theater to the Garden. The auditorium had the twinkling stars, cloud machines, the recreation of a new England Town on the walls, etc.. However I do not know if the town was a giant mural, similar to the Garden’s, or miniature buildings actually constructed; several articles in the Athol papers, at the time of the opening, state that a Water wheel was constructed in the auditorium. The lobby and Foyer of the Capitol was quite different from the Garden. While the Garden’s lobby & foyer were designed to look like an old new England parlor, the Capitol’s were designed to look like the interior of a covered bridge. The facade to the Capitol was quite different from the Garden. The facade was UNIQUE, very difficult to describe (imagine something similar to the Westwood Crests facade only much smaller and done over in a Colonial style). However the Capitol’s marquee and vertical sign are almost Identical to the Garden’s.

Here is a link to the Capitol theater’s Cinema Treasures page: http://cinematreasures.org/theaters/27414

I live in Greenfield for a time after retiring visited this one time beauty, but like GCC and other company the spit it what a same sad place to view a movie, I did move

Hello jaboschen I enjoyed your Garden Theater article in “Marquee” the Theater Historical Society magazine. My question is about the splendid murals within the Garden Th. What are the 2 large painted windows behind the Romeo and Juelet organ chamber area? They don’t appear to fit any general design of that colonial art work. Realizing the interior murals are long gone I realize that my question maybe unanswerable!

I recall many visits to the Garden back in my teenage years of the 1950s. Greenfield had 3 theaters at the time, The Garden, The Lawler and the Victoria. I shall never forget the night in 1958 I took my girlfriend to the movies at the Garden and when we came out the fire department had left a note on my windshield for me to contact them. Apparently the wiring on my old 48 Pontiac had caught fire while we were in the theater and burned up all the wiring in my car.

It was definitely a sad day when I learned the Garden Thester would be changed into a multi screen theater. It was so beautiful in there ! The way the ceiling would light with stars and the whole majestic beauty of the theater. I understand that it was deteriorating but it would have been nice to see it restored instead. Sadly there aren’t any of these places left in the state…

The Garden was recently sold by the partners who owned it to a husband & wife team. (He worked in the Garden as a student). They plan some refurbishment, but will continue operation as before.

I read about the sale on Facebook , I know it was difficult for Bill and George to keep the place running and they did it by themselves .