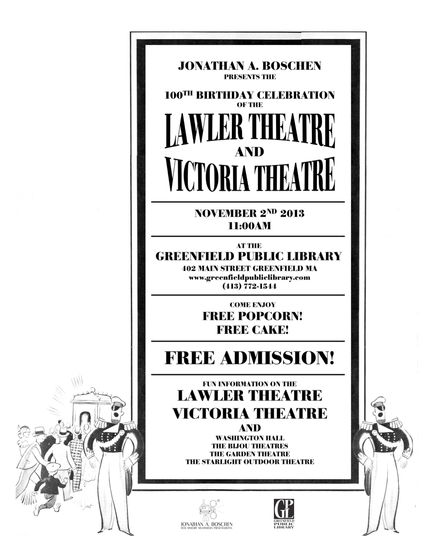 GREENFIELD, MA — Throughout the twentieth century theaters have played a vital role in both American society and culture. Greenfield, Massachusetts had several theaters which contributed immensely to both the Greenfield community and Franklin County. Two of the theaters, the Lawler and the Victoria, both opened in the year 1913 and were the first two buildings to be constructed specifically as theaters in the town of Greenfield, as well as in Franklin County. Sadly, neither of these theaters exists today as the auditorium to the Lawler was demolished in 1963 and the Victoria was entirely demolished in 1998. If both buildings still existed and were in use today, they would be celebrating their 100th Birthday this year.

On Saturday, November 2, 2013 at 11:00am, the Greenfield Public Library will do just that as it holds a 100th birthday celebration and multi-media presentation honoring the legacies of the Lawler and Victoria. The presentation, compiled by Film and Theater Historian Jonathan A. Boschen, is an Apple Keynote slide show which explores the rich history of these two iconic buildings through the use of photographs, building blueprints, and newspaper articles. In addition, information on Greenfield’s other theaters (Washington Hall, the Bijou, the Garden, and the Starlight Outdoor Drive-in) will be briefly discussed. Admission to the presentation is free and complimentary freshly popped popcorn and cake will be served.