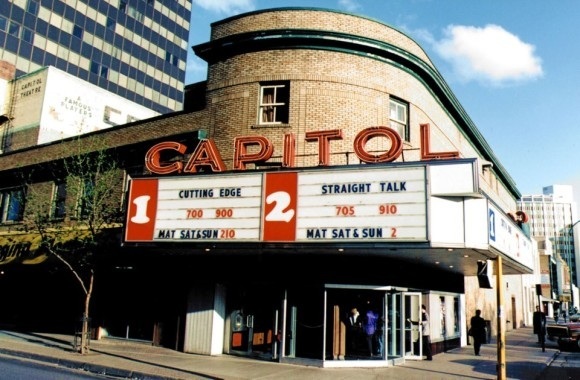 Capitol was converted to two theatres in 1975.Some seats,doors,and sections of the balcony and ceiling survive in the Regina Plains Museum.

I had the opportunity to go up to the “new” projection booth in the early ninties. The balcony had been converted into the larger projection booth for both auditoriums. Once up there, you could visualize the balcony (the steps were still there with some seats on them), as well as look into the first projection booth with some equipment still in it. You could also imagine the original design on the ceiling of the theatre, before they built the wall dividing the auditorium. A true gem on the prairies.

In it’s early days it had it’s own 10 person orchestra to accompany silent movies and vaudeville acts. On October 21, 1940 the Cap hosted the world premiere of “North West Mounted Police”. The Cap was decorated to resemble a western style fort. The Regina Plains Museum has a wide variety of memorabilia which sadly, I do not believe is on display. It was owned by the Famous Players chain.

I think I watched the original “Poseidon Adventure” at this theater when I was probably ten years old. I remember when they tore it down. More information about this great theater can be found at the City of Regina Archives (see View link)

I enjoyed a few good movies in both halves of the Capitol Theatre and always while waiting for the feature to start wondered to myself how grand the theatre must have looked when it it was a whole and a single theatre with its ornate plaster ceiling, balconies, and plush lobby. When they tore down the building one of the theatre’s secrets was revealed to me. The curved facade of the building was produced by one single three feet thick I-beam bent to a curve—very impressive iron work. The theatre was torn down because the greedy Crown Life corporation wanted a head office on the corner, when plenty of other similar sized lots were available at the time. They destroyed a piece of history and then left town about four years later—hell is to good of a place for the likes of them. Regina save your Cinema Six drive-in !!!

the photo on the Regina library website shows the interior of the Capitol,and it is not atmospheric as previously thought.Photo can be viewed at this address –
www.reginalibrary.ca/commform/ReginaArchives/archives.htm
listed under Education and culture.

The architect for this theatre was Thomas Lamb.

The Capitol was part of the Famous Players Canadian chain in the early 1960s. 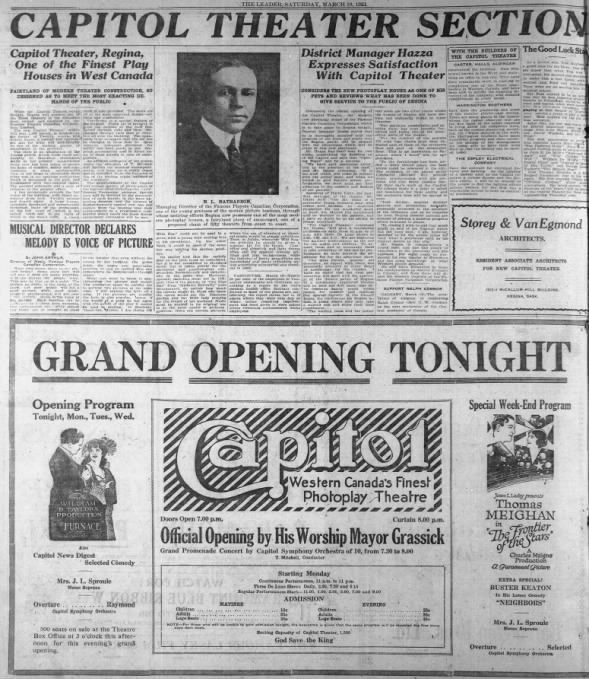 and reopening as a twin from September 4th, 1975 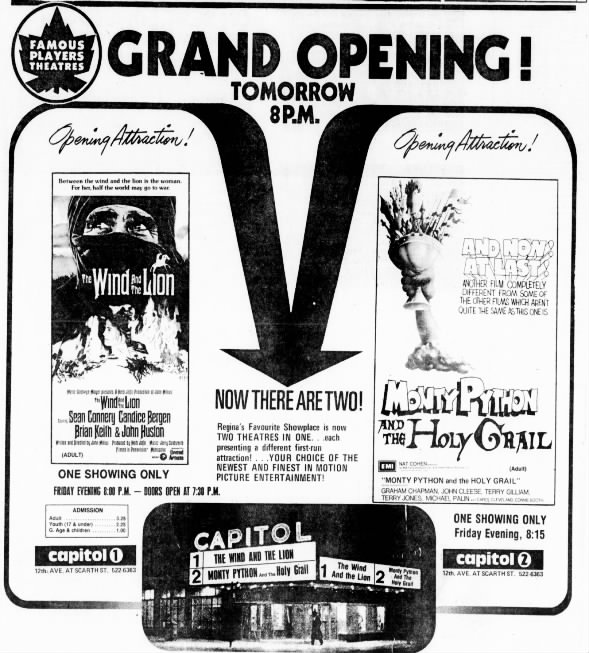