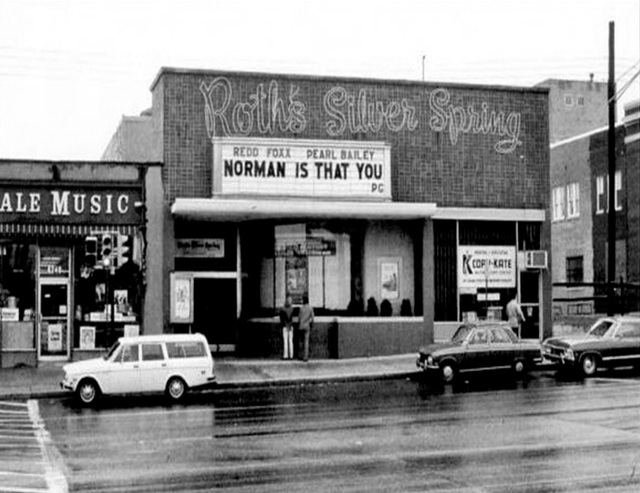 The Seco Theatre opened on November 7, 1927 with Wallace Beery in “Fireman, Save My Child”. It was designed by architects Faulconer & Proctor and was equipped with a Robert-Morton 2Manual/4Rank theatre organ. By 1941, the Seco Theatre was operated by Warner Bros. Circuit Management Corp.

The theatre was remodeled in 1953 by architect Warren G. Sargent and it was renamed Roth’s Silver Spring Theatre. Later changed to Silver Spring West to distinguish itself from the nearby Silver Spring East.

The Silver Spring West Theatre was closed in June 1991 and was converted into a church. It was demolished in November 2015.

Now a church, what a waste! I worship movies…. LOL

The 1970 version of WUTHERING HEIGHTS, starring Timothy Dalton and Anne Calder-Marshall, opened at Roth’s on 2/24/71 and played there for 8 weeks.

On 9/1/52, the Seco began showing films only on Fridays-Saturdays-Sundays-Mondays until 9/21/52, when it closed. Its last attraction was a double-bill of MACAO and WACO. At that time the theater was part of the Stanley Warner theater chain.

If I recall correctly this article was a very funny piece about riotous Saturday matinees at the Seco…but it’ll cost you $3.95 to find out if I was right.

I read that NYT article through my library. What a bunch of little brats back then.

This was just demolished.

I remember going here since my friend used to work here.