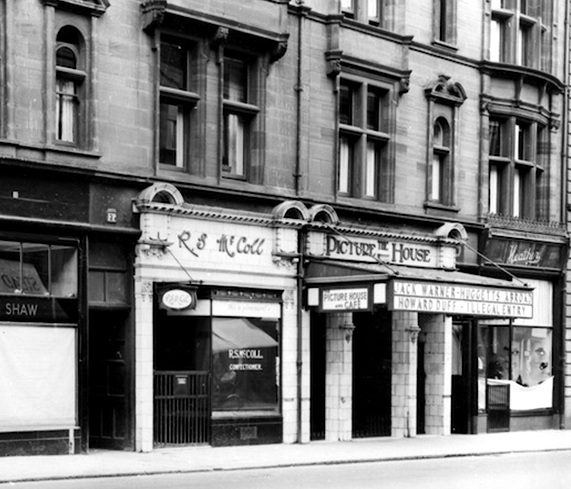 The Picture House opened on 13th October 1921. It was operated by the independent Ayrshire Cinema Theatres Ltd.

In May 1928 it was taken over by Denman/Gaumont British Theatres Ltd. In December 1928, they enlarged the Picture House to 1,800 seats and equipped it with a Jardine 3Manual/10 Rank organ, the first to be made by this manufacturer. It also boasted a popular tea room for the use of patrons.

It was re-named Gaumont from 1st May 1950 and was closed on 8th June 1968. The building was demolished ands a Littlewoods department store was built on the site.

The Picture House opened on 13th October 1921. In May 1928 it was taken over by Denman/Gaumont Theatres and in December 1928 the cinema was enlarged to 1,800 seats(original seating capacity is not known).

It was re-named Gaumont from 1st May 1950 and closed by the Rank Organisation on 8th June 1968. It was demolished and a Littlewood’s department store was built on the site.