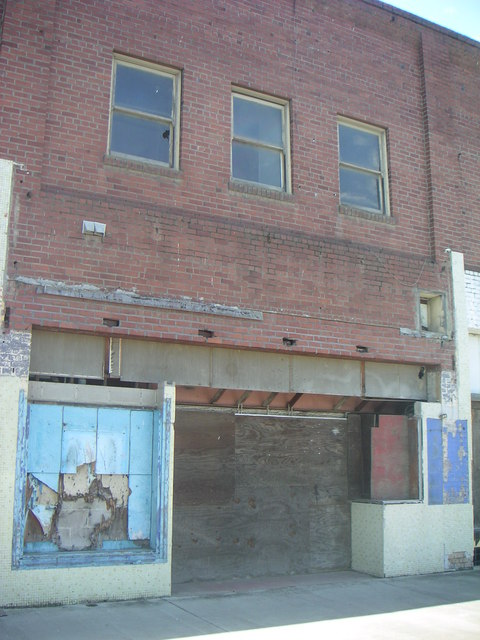 It reopened as a Spanish language movie theatre and live theatre on July 13, 1967, renamed Tropical Theatre. It was closed on September 29, 1974. From August 9, 1975 it reopened as an adult movie theatre named Flick Theatre, last know as Flick Adult Theatre when it closed around 1981 and the building became vacant.

In April 2019 it is standing closed and unused. The facade is plain brick with three windows on the second floor.By 2005 the marquee had been removed as have the front entrance doors and wooden boards errected. There were still the remnant of the paybox at the entrance. It appears that the interior has been gutted.

The Royal Theatre in Hanford was one of three houses taken over by Robert Lippert in 1942. Their former operator, Arthur Fukuda, closed them when, on March 27 that year, a curfew was imposed on Americans of Japanese ancestry.

The other Fukuda houses Lippert took over were in Sanger and in Guadalupe, California.

The Royal Theatre launched on July 2, 1927 with Ken Maynard in “Señor Daredevil.” On September 5, 1929, the Royal converted to sound. It closed for a refresh in December of 1942. Material shortages hampered the effort and under new operators, the Royal re-emerged as the more patriotically named, Victory Theatre on August 5, 1943.

The Victory Theatre discontinued operations on October 3, 1966. It was given a refresh becoming the atmospheric Tropical Theatre on July 13, 1967. The Tropical combined live Hispanic entertainment and Spanish-Language films until closing September 29, 1974 at end of lease. On August 9 1975, the theatre became the Flick Theater / Flick Adult Theatre running at least to 1981.