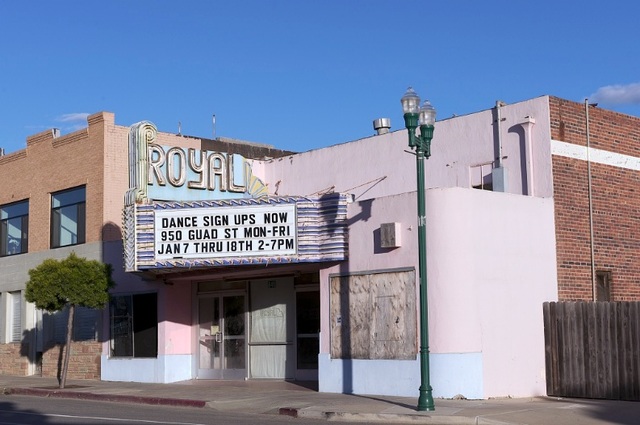 The Royal Theater opened in 1939 and closed in the late 1990’s. If you know anything else about this theater, please post it here.

Listed as operating in Film Daily Yearbook’s that I have from at least 1941 thru 1952 and beyond….

The little town of Guadalupe is located in a wide expanse of agricultural land midway between the larger city of Santa Maria and the Pacific Ocean. Between Guadalupe and the ocean lie the majestic Nipomo Dunes, a stretch of pristine desertlike sand formations and shoreline—now protected as parkland—which are best known perhaps as having been the location of the City of Pharaoh/Exodus set from Cecil B. DeMille’s first (1923) cinematic account of the Ten Commandments story. Guadalupe’s sleepy, picturesque downtown features a collection of largely 19th and early 20th Century buildings. The Royal Theatre is one of the first prominant commercial structures one sees when entering the downtown from the road leading from Santa Maria.

I know that the Royal screened Spanish language product in the 1970s and 1980s. At this time, the theatre was operated by Hank Garcia, who also operated one of the (now vanished) old theatres in Santa Maria. The Garcia family still owns the Fox Theatre and Green Valley Cinema in Watsonville, although the Fox closed earlier this year.

When I first saw the Royal in the mid-1990s, it appeared to have been closed for a period, and was looking a bit worn.

A few years later, I was surprised to see that the Royal had been beautifully refurbished with much new neon on the marquee, and a fine paint job inside as well as out, from what I could see through the doors.

The marquee was advertising some sort of local “POLITICAL FORUM,” and I assumed (correctly, it turned out) that the theatre was being used as a facility for town meetings and assorted special functions.

That same day, I drove out to the Nipomo Dunes to see if I could spot any of the scattered remains of DeMille’s buried set. The Dunes were fenced-off to protect the remains—fragments of which I could see littering the sand in the distance—but I did get to talk to the ranger at the Park entrance, who turned out to be a lifelong resident of Guadalupe. He told me that recently the Royal had been restored and reopened as a firstrun movie theatre by an individual who had been operating the Fox Theatre in Taft. He had secured good relationships with several distributors, but this venture at the Royal failed, and the theatre closed as a movie house after several weeks, and was subsequently being used for local gatherings and functions. In the years since, I have driven by the Royal a couple of times, and it would appear to still be functioning in this capacity.

FOOTNOTE: The ranger I talked to at the Nipomo Dunes told me that, when he was a boy, two of the wood and plaster sphinxes from DeMille’s movie set were relocated to flank the driveway of a private residence in town. They stood there for many years. Just a few months ago, I came across a postcard at an antique show (an item too expensive for my budget that day) dating from the 1920s or 30s, showing that very pair of sphinxes. It was captioned as picturing a scene in Guadalupe, and the sphinxes as being from The Ten Commandments set.

Guadalupe is a town known for its small-town charm, and now there are plans to turn it into an entertainment hotspot.

Pieter de Groot and David Radmacher of Bennu Productions are trying to pump life back into Guadalupe’s landmark Royal Theater by turning it into a multi-media center, and bringing in state-of-the-art audio, video and editing equipment, and live talent.

The two are investing half-a-million dollars into the theater that was built in 1939, changing its name to the Gold Coast Sounds at the Royal, and inviting performers from all over.

It’s been years since movies were shown at the Royal Theater on a regular basis. Currently, the city-owned building is used by several non-profit organizations to throw events, but most of the time is sits unused and empty.

Nearby business owners are excited about the opportunity, and say it’s a chance for more people to discover all that Guadalupe has to offer.

“We’ll get a lot more people coming through the area, we’ll get a more diverse crowd. I think we’re always looking for more business to let people know who we are, so this is going to be wonderful for all the businesses in Guadalupe,” says Barbara Abernathy.

In a year the lease will be up, and the owners will have the chance to buy it from the city.

Guadalupe’s a nice little town. Here’s another photo of The Royal.

The only mention of the Royal Theatre under that name that I can find in Boxoffice Magazine comes from the June 25, 1949, issue, which says that Robert L. Lippert had sold the house to Moses Hernandez.

But the April 22, 1942, issue of Boxoffice published an item that said that Robert Lippert was taking over three houses, owned by Arthur Fukuda, which had been closed because of the Japanese curfew. It named the three theaters as the Royal in Hanford, the Royal in Sanger, and the Guadalupe in Guadalupe. I think it’s possible (and even likely) that Boxoffice’s copy writer got the name of the Guadalupe house wrong (they did misspell Hanford as Handford) and that all three of Fukuda’s theaters were called the Royal.

It’s not surprising that a Japanese American would have owned these theaters. Many of the agricultural areas of California had substantial Japanese populations during that era, and American-born Japanese, unlike those who had immigrated, were not prohibited from owning real property. Perhaps Arthur Fukuda has descendants who can tell us something about the Royal Theatre.

My grandfather, Kiyozo Noji managed the Royal Theater in Guadalupe and my grandmother, father, and uncle ran the concessions area from the time that the theater first opened for business in 1939 until they were relocated to a Japanese internment camp in 1942. Two other employees ran the projectors during that period.