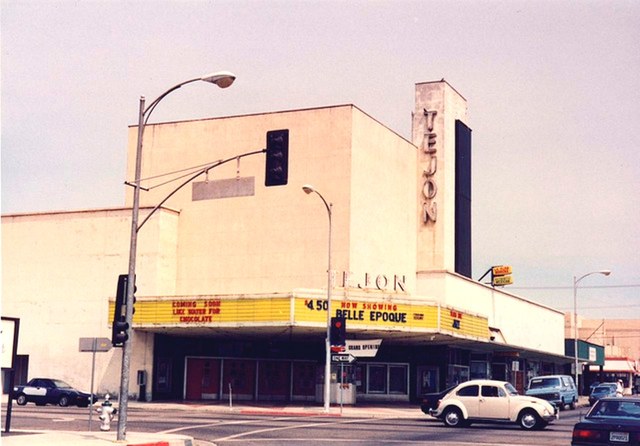 Opened to the public on Wednesday 17th June 1947 with the movies “It Happened in Brooklyn” and “Calendar Girl”, the Tejon Theatre was operated by the local Lemucchi family who operated several other theatres in the Bakersfield area. The policy was to screen ‘family’ movies. All seating was on one floor (with no balcony) and the auditorium was lit by indirect trough lighting.

From 1979 and into the 1980’s it was sub-leased and began screening Spanish language movies. After a short period of closure, it re-opened in November 1991 as an ‘art house’ theatre, but this didn’t last long and it became a second run bargain house showing double and even triple bill programmes, closing again in 1992.

In 1994 it re-opened under new management and began a successful policy of screening art-house, cult movies and old Hollywood classics. Sadly, after working hard to fix up the theatre and operating it successfully, it was ‘taken away’ from the young couple who had operated it in Spring 1996, by a car dealership owner who planned to convert it into a live performance venue. This never happened and in recent years has been converted into a church who maintain the building to high standards.

The theatre looks the same today, minus signage and a blank marquee. Also, it looks like the exterior has been re-painted recently.

I was passing by with a group of other cinema enthusiasts the other week and taking exterior photo’s when a side door opened and the care-taker came out and invited us inside. Very nice lobby and auditorium and the original proscenium arch and painted mural on the ceiling are still intact.

Southwest Builder & Contractor issue of 11 May, 1945, says that architect Charles H. Biggar was preparing the plans for a movie theater to be located at Monterey and Baker Streets, for Banducci and Lemucchi Theater Company. This issue of the magazine gives the size of the planned theater as 998 seats, but a later issue (16 November, 1945) says that the seating had been reduced to 900, and gives the projected cost of the theater as $175,000.

Here is a 2010 interview with Tim and Karrie League, who operated the Tejon Theatre from 1994 to 1996. After leaving Bakersfield, the Leagues moved to Austin, Texas, where they found the successful Alamo Drafthouse chain of movie pubs.

The Tejon’s marquee is now in the possession of the Kern County Museum, and awaiting restoration so it can be installed in the museum’s “Neon Courtyard” according to the note at the bottom of this web page.

Here’s another article with details about the Tejon as the Leauges expand their awesome Alamo concept: http://www.entrepreneur.com/article/224235

It is great to have a theatre run by people who care so much about the experience on every level – right down to in-theater pyrotechnics and themed food specials.