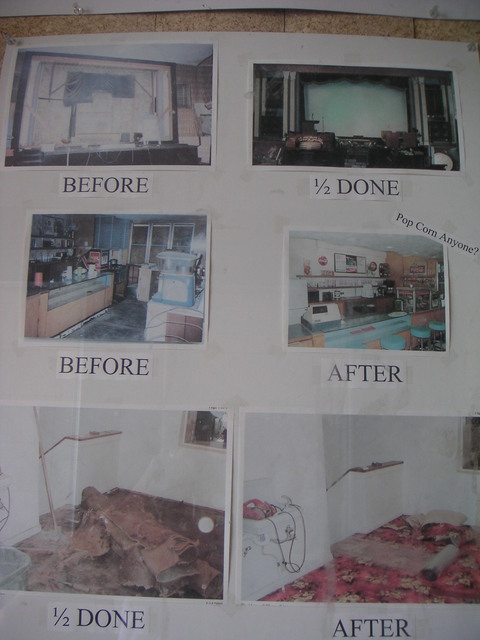 The Granada Theatre opened on January 31, 1929 with Bebe Daniels in “What a Night”. Around 1993 it was equipped with a 4 manual 24 ranks Robert Morton theatre pipe organ (originally installed in the California Theatre, Glendale, CA), which was linked to a Wurlitzer 2 manual console in the lobby. The Granada Theatre was closed in 2019 and was sold and gutted to become a funeral home. The building was vacant by 2020.

Thanks for the above link. I do see (on the left-hand side) one of the designs. I can only hope the rest were preserved.

The L.A. Public Library misidentifies this 1928 photo as being of the California Theatre in Bakersfield. Given the Moorish detailing, suitable for a theatre called the Granada, I wonder if perhaps it actually depict this house. The size and shape of the facade is a good match for that of the Granada, which can be seen on this page as it looked long after its 1950 remodeling.

The Kern County Museum has an image of the Granada Theatre in Bakersfield: http://www.kcmuseum.org/stories/storyReader$1296

The photo to which Clara linked on July 25 clearly depicts the same building in the L.A. Library photo to which I linked on May 13. The distinctively-shaped attic vents above the arched windows to the sides are a dead giveaway.

@Joe Vogel: The photo you posted is, in my estimation, an early, if not original, depiction of the Granada Theater. According to an article in the Bakersfield Californian (1928 September 20, p. 11) construction of the theater had only just begun, and was to be completed by January 1, 1929. An article on January 30, 1929 states the theater was to open the following day (a Thursday), showing Bebe Daniels' film “What a Night.” While in 1928 it was planned to cost only $55,000, it turned out costing $20,000 more. The theater was owned by H.H. Brown, who, the article says, was a prominent apartment owner in this East Bakersfield neighborhood, and leased by Josephine and Paul Davini (later owners, I believe). It sat 754 people, giving it the largest seating capacity on a single floor of any theater in the city. It also featured a “crying room,” where mothers could take their babies so as not to disturb other guests, and a men’s lounge and smoking room. It was built in brick, with a stucco siding. This 1929 article provides more detail about decorations used. The architectural firm Symmes & Cullimore prepared plans for the building, which was done in a “Morisco-Spanish style.” William Eissler was the general contractor. Store display rooms were to be located on either side of the entrance. The 1928 and 1929 articles include a drawing (presumably by the architects) of the building, which looks strikingly like the “1928” photo you posted (it seems likely that the LAPL photo is dated incorrectly). A 1929 photo in a full-page ad for the opening of the theater (1929 January 30, p. 5) depicts the theater without the store window awnings and without the top sign, but otherwise very similar. I hope this helps.

JosephF: The information you provided is very helpful indeed. Learning the names of the architects led me to several interesting discoveries.

According to an item in the November, 1927, issue of the trade publication Architect & Engineer, Edwin J. Symmes and Clarence Cullimore had just formed their partnership, so the Granada was probably one of their first collaborations. The firm of Symmes & Cullmore designed a number of buildings in the San Joaquin Valley, many of them public schools. Symmes died in 1935, but Cullimore appears to have returned to an individual practice in 1932, designing primarily residential buildings after that. He was also noted for his research into the architecture and building of the Spanish and Mexican periods in California, which led to his 1948 book, Adobes of Santa Barbara.

This page at the web site of the Kern County Museum includes a partial list of buildings designed by Symmes and Cullimore, individually and in partnership. There are no theaters listed other than the Granada. The page also has a link to a small photo of the Granada ca.1941.

Google Documents provides an 2004 article called Spohn’s Old Granada Theatre, by Carla LaFong and Gilbert Gia. It includes a few period photos, history, and a fairly detailed description of the Granada at the time the article was written. The article can also be downloaded in pdf format from Gilbert Gia’s web site (follow the “persons” link.)

Walnut Hill Productions featured the Granada’s hybrid Robert Morgan/Wurlitzer theater organ on its web site in August, 2007. In addition to numerous photos and technical information, the page includes links to downloadable recordings made on the Granada organ.

Sadly I believe this theater was sold and gutted for use as a funeral home after Jim Spohn’s passing.