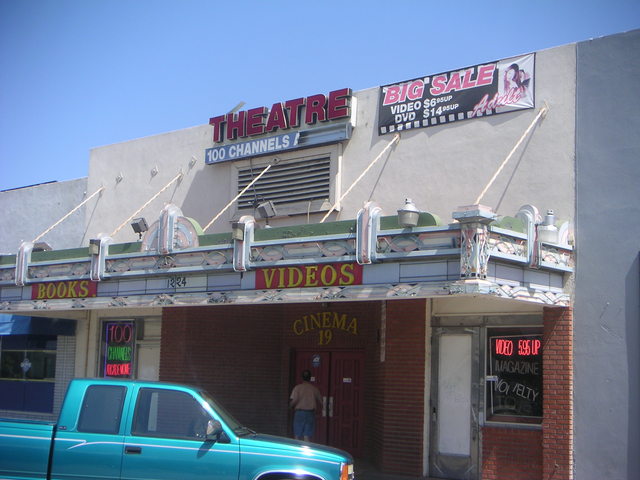 The Virginia Theatre opened in 1920. In recent years it has operated as an adult theatre, first named Paris Theatre from June 28, 1963 and from August 11, 1967 it was renamed Cinema 19 screening art house movies, but soon reverted back to adult movies.

Google street view shows the word “Theatre” displayed at the top of this building, with the words “100 channels” in smaller lettering just below. The marquee has the words “Books” and “Videos” on it. There’s a banner hanging at the top of the facade, too blurry to read in street view, but it looks porn-related. I think Cinema 19 is still in business at this location as some sort of video porn shop. It’s still all over the Internet as Cinema 19 Theatre and Adult Bookstore, but I can’t find any reviews describing it. There are also a number of Internet listings for a Wilton Cinema Inc., at the address 1224 19th Street.

Boxoffice of March 10, 1945, has a thumbnail biography of Mrs. John Carnakis in its “Twenty Year Showmen” feature. It says that the Carnakis family began operating the Star Theatre at Taft, California, in 1912, then in 1915 moved to Bakersfield where they opened the C&S Theatre, and four years later built the Virginia. That would give a likely opening date of 1919 or 1920, rather than 1925 for the Virginia. It’s unfortunate that Kern County doesn’t have its building records online so we could find the actual year of construction for this building.

The Carnakis’s son, Manuel, was on the Bakersfield City Council in 1945. Issues of Boxoffice from the 1950s mention that he was later on the Kern County Board of Supervisors, and served at least one term as Mayor of Bakersfield. He is mentioned in Boxoffice as late as the issue of February 25, 1963, as operator of the Virginia Theatre.

Boxoffice of January 31, 1953, said that the Virginia had reopened at Christmas after extensive rebuilding occasioned by the earthquake which had struck Kern County in the fall of 1952. The theater had actually continued in operation for some time after the quake, but inspectors then found concealed damage that could have caused the roof to collapse, so the house was closed for repairs. After reopening, the item said, the Virginia was operating from noon daily, and was enjoying full houses as the only nearby competitor, the Fox circuit’s Rex Theatre, was still closed.

I’ve been unable to find the Paris Theatre mentioned in Boxoffice, but the Cinema 19 is mentioned once. The December 9, 1974, issue says that the house was part of the 10-theater Amber Theatres chain of adult theaters, operated by 33-year-old Nancy Lindsey. Other houses in the chain included the Cine Cienega in Los Angeles, Fine Arts in San Bernardino, Ritz in Ontario, Roxy in Long Beach, Cave and Cinema in Hollywood, Yale in Santa Monica, and Corbin in the San Fernando Valley. The chain had recently taken over the Highland in Los Angeles as well.

The name switch to the Paris happened on June 28, 1963, showing “nudie” films (The Virginia had been periodically booking these films anyway). They reverted back to third-run product at 50cents on March 4, 1964. On August 12 it was back to the nudie cuties.

John Carnakis built the Virginia Theatre in 1919 and opened the venue in 1920. At its tenth year, it was remodeled relaunching with Western Electric Sound in November 20, 1930 and the film, “The Squealer.”