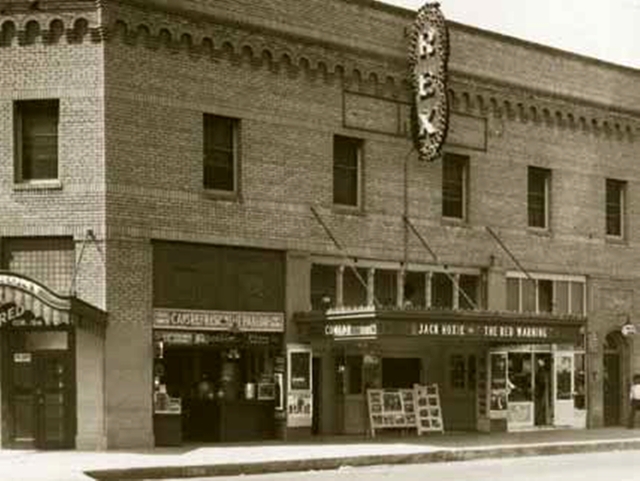 Replacing an earlier 1913 built Rex Theatre, this Rex Theatre was opened September 16, 1929. It was closed on 20th July 1952 and received substantial damage in the Tehachapi earthquake in the early hours of the morning of July 21, 1952. It never reopened, and a parking garage now stands on the site.

During the 40’s the Rex Theatre was operated by Fox West Coast Theatres along with the nearby California, Fox, Kern and Nile Theatres.

The Rex Theatre building was torn down in the 1950’s and was on the corner of 19th and L streets. The location is now a parking lot.

The Kern County Museum has an image of the Rex Theatre: http://www.kcmuseum.org/stories/storyReader$1249

The Rex might have been finished off by the 1952 Tehachapi earthquake. An item about the nearby Virginia Theatre in Boxoffice of January 31, 1953, said that the Virginia had reopened just before Christmas, but that the Rex was still surrounded by steel scaffolding while engineers continued to inspect it. Perhaps the damage to the Rex turned out to be too costly to repair.

Boxoffice of April 17, 1948, had said that Fox West Coast had renewed its long-term lease on the Rex and several other theaters. The length of the lease was not mentioned. I haven’t found the Rex mentioned in Boxoffice after the 1953 item.

The correct address for the Rex is 1305 19th Street. A huge parking garage now covers that whole block along 19th Street.

The Tehachapi earthquake took place on July 21, 1952. It’s likely that in the confusion of the next few days the theater’s ads just didn’t get pulled from the newspaper. As I recall, the earthquake hit about four o'clock in the morning (it was powerful enough to wake me up where I lived in suburban Los Angeles, about a hundred miles from the epicenter), so the last show at the Rex must have been on the evening of July 20.

Charles H. Biggar was one of Bakersfield’s most noted architects. Around 1915 he was briefly in a partnership with Charles H. Kysor (who later changed his surname to Kyson), son of pioneer Los Angeles architect Ezra F. Kysor.