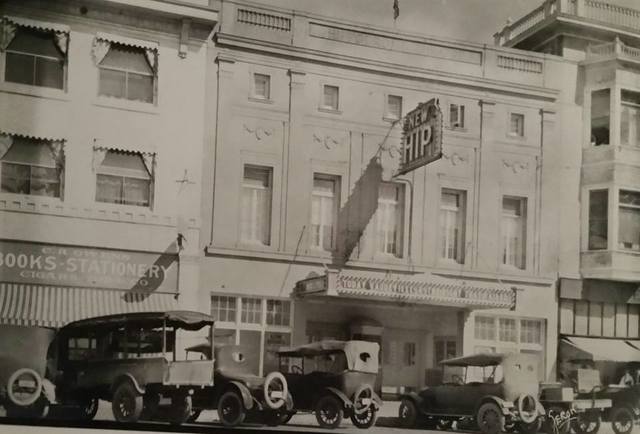 Taken over by Fox West Coast Theatres, it was reopened February 10, 1938 as the Kern Theatre. It was closed due to earthquake damage in 1952.

During the 40’s the Kern Theatre was operated by Fox West Coast Theatres along with the nearby California, Fox, Nile and Rex Theatres.

The Kern had wood floors——like the Montgomery Ward store just down the street—-showed movies after they first showed at the Fox theatre—-were owned by the same chain.

THe Hippodrome had actually been closed for nearly a decade when Fiox West Coast decided to rename it the Kern and reopened it in 1938 as a temporary first-run until the Nile opened in a couple of months, where first-run policy was instituted there and the Kern became a second (subsequent) run theatre. Then, in the mid 40’s, the theatre was remodeled (new seats, carpeting, paint) to become a “continued first-run” theatre, linked to the larger Fox Theatre whereas a Fox double feature would move immediately to the Kern without the normal kind of clearance (or buffer)between first and subsequent run engagements. (it was normal to hold back giving films to other theatres in an area for a month or more between first and second run). So the Kern didn’t have to compete at all with other theatres and got to charge more than a second ruin would normally have charged. This was one of the non-competitive practices that the consent decrees banned in late 1949-1950.

Photo added as the New Hip circa 1920. Courtesy of Mark Mcgowan.