The Cinema 285 was opened July 2, 1971 with Dustin Hoffman in “Little Big Man”. It was built and operated by the Georgia Theatre Company. The location was the 5900 block of Roswell Road in Sandy Springs, at the intersection with Hammond Drive. At the time it was part of the Grant City Shopping Center. The W.T. Grant Company opened several shopping centers along I-285 during those years and two of the others also contained theatres, the Doraville and Candler Road Mini Cinemas. The land for this center was cleared in 1969, but the construction suffered through several starts and stops before finally finishing in June of 1971.

This was the last of the full size second run theatres to be built in this area. It had 500 seats and a good full sized screen that took up the entire front wall. The very small projection booth contained the two 35MM projectors taken from the East Point Theatre, 6,000 foot reels and two new Xenon lamphouses. The lobby was almost non-existant, consisting mainly of a hallway from the auditorium to the front doors wide enough to meet the fire code. The boxoffice was attached to the theatre but stuck out into the breezeway which formed the “L” junction of the shopping center. The office was upstairs.

The Cinema 285 opened in June of 1971 with the second run release of “Little Big Man” the day after “Man” ended its very successful three month run at the Phipps Plaza Theatre. Since Phipps is only four miles away, the movie had already been seen by almost anyone in that area who cared to see it. Two weeks later, “Love Story” opened the day after its six month run at the Capri Theatre in Buckhead. The Capri is only six miles away, and the pattern for sub run movies at this site was clearly established. No movie that played in the first run houses of the northern suburbs was going to do much business here.

The biggest hit of the entire life of this theatre came in the Spring of 1972 with the sub run of the reissue of “Song of the South”. This movie had played its reissue release at the Fox Theatre downtown so there was a big audience that had waited for it to make it to the suburbs. Due to the demographics of the Sandy Springs area at that time, almost any childrens movie, regardless of where it played before, could be counted on to do well. (The biggest hits for the Sandy Springs Mini Cinema and the North Springs were both Walt Disney movies direct from their downtown runs at the Fox.)

The occasional childrens movie aside, the Cimema 285 was never a big success. It did pretty well with some of the wide break “lower tier” first run movies such as “Evel Knievel” and very well with the “4Wall” rentals such as “Chariots of the Gods” but overall, business was pretty slow. Sometimes a family movie which had done poorly in its first run engagement, such as “Tom Sawyer” would find an audience at the Cinema 285.

By 1974, the Grant store had closed and the space taken over by Handy City, the “preview” of the Home Depot chain. The name of the shopping center was changed from Grant City to Hammond Square. Since Cinema 285 was a confusing name (I-285 runs for 62 miles around Atlanta and there was nothing in the name to pinpoint just where around 285 the theatre was located), the name of the theatre was changed to Hammond Square Cinema. Although this might have helped in 1971, it took more than just a name change to save this place. At Christmas of 1973, General Cimema had opened its first Atlanta location at Perimeter Mall, just two miles away. This finished any hope that Hammond Square would be anything more than just a throwaway house. Although not expensive to run (payroll wise, all you needed on a slow night was a manager, cashier, and projectionist) Georgia Theatre even tried closing during the week and opening only Friday through Sunday. This finished off any hope for survival, although the chances of a large single screen theatre succeding anywhere in Atlanta were very slim by that time.

In 1977 the site was closed followed soon after by the Sandy Springs Mini Cinema which had been taken over by the Weis Company. The site of Cinema 285 was converted to a health club which it remains today although it has gone through several ownership and remodeling changes. In 1987, General Cinema opened an 8-plex in the new Parkside Shopping Center next door. From the old boxoffice you can look south and see the GCC entrance. (That site was closed by GCC in 1999, sat vacant for a year, reopened by EFC for a year and closed, sat vacant for another year, was remodeled and reopened by Madstone for a year, closed and then reopened by LeFont in June 2004.)

Looking back, there was nothing remarkable about the Cinema 285. Although a nice place to watch a movie and larger than anything you would see in a multiplex today, in its time it was just another average theatre in an average suburban shopping center which was put out of business by the changes in the patterns of booking and theatre constuction of the 1970’s.

IT’S GONE! Was in the area today and took it own me self to take a drive over to the former theatre to make a couple of photos of it. Imagine my dismay to find that it was swallowed into a sea of asphalt leaving no sign that it ever exited on this celestial ball.

RETRACTION. THE FORMER THEATRE BUILDING IS STILL INTACT AS OF 12/28/05. In that I had not graced the area in over a decade, I did not recognize the area and missed looking through the cracks. If someone in the Springs area with a camera wouldnâ€™t mind taking a photo of the building and posting it, it will save me the hassle and petrol of having to scout back over there if and when I am back in the Atlanta.

It was such a tiny cinema. I don’t remember there being much of a lobby and the ticket booth was next door or across the way. We went to see “Charlotte’s Web” there for a birthday party- my most vivid memory of the theater and it was just a lilliputian type place. 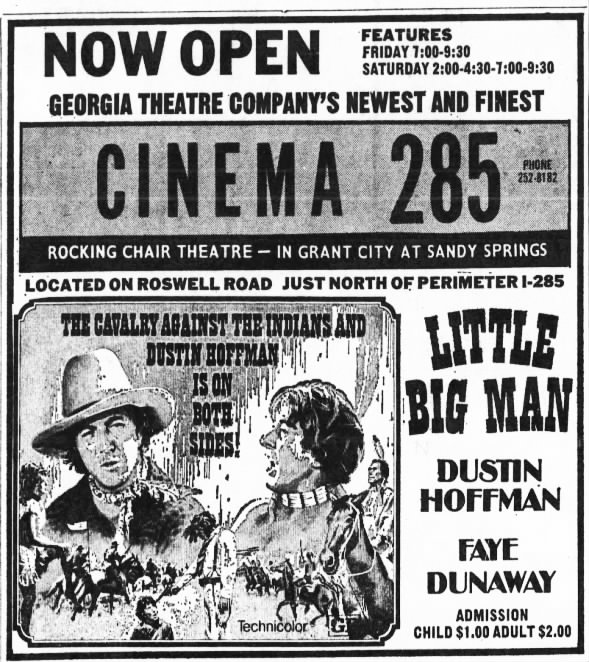 Three pictures of the marquee added in the photo section. From the summer of 1973.

I only recall ever visiting this location once to see “The Reincarnation of Peter Proud” (at least I think this was where I saw it!) Funny how in that era you sometimes had to travel to see a film.

Thanks for your comment Raymond. Since I lived in Sandy Springs, and most of the first run theaters were moving north, I did not need to travel very far to see a movie except for the occasional downtown ones. North DeKalb sometimes ran first run and I went there for Jeremiah Johnson and Freebie and the Bean but that was as far as I had to go. With Eastern Federal, Georgia Theater, and Mini Cinema all having locations on Roswell Road, everything played here eventually.

After I started getting interested in the theaters themselves I would sometimes make the longer drive to see a different theater. South DeKalb, Scott Drive In, Cobb Center, the old original on the square Roswell Theater are a few that come to mind. These days there may not be as many locations, but you can see every film in release in one place. And, they all look the same. More convenient perhaps but not as much fun as in our day.

Of course once I started working in theaters it was a different story. GCC and GTC Southlakes were over 35 miles from my house and one of my favorite booths, South Expressway, not much closer.

Three pictures of theater as it appears today added to the photo section.