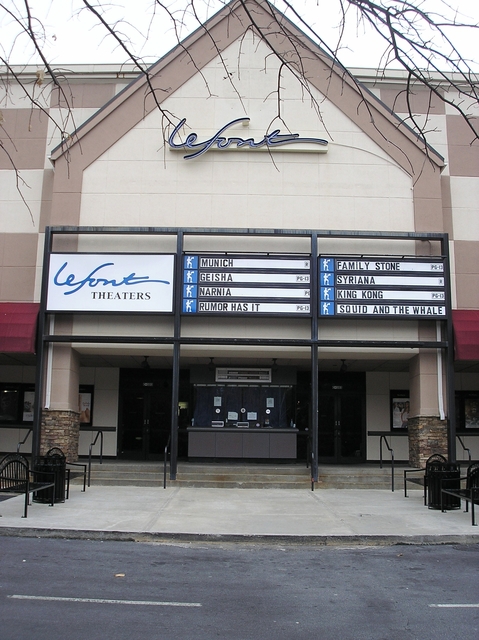 Located in Sandy Springs to the north of Atlanta. General Cinema opened the Parkside 8 on May 20, 1988. As opposed to the 1970’s when they first came to Atlanta, GCC, by the 1980’s, had become very slow in opening a theatre in a new area. They either waited until the area was saturated with screens, as in the case of the Hairston 8, or waited until the growth in an area had peaked and they had a stagnant population to draw from. The Parkside 8 was a case of the latter. If you stand facing the boxoffice and look up to your left, you can see the health club building which was the home to the Cinema 285 / Hammond Square Cinema from 1971 until 1976. Parkside was an example of the very bland style of theatre design that went out with the arrival of the carnival or spaceship design that AMC and Rave started building in the 1990’s. As with the Merchants Walk 8 which had opened a year earlier GCC seemed determined to make the site as difficult as possible to find. The Parkside Shopping Center faced Roswell Road, one block north of the Roswell Road / Sandy Springs exit off of I-285. The theatre did not face this heavily traveled road, but instead was located in the rear of the center and faced Sandy Springs Circle, a residential street. Other than the small standard space in the shopping center sign there was nothing on Roswell Road to tell anyone that a movie theatre was present. A small marquee was added to the front wall at the south end of the center, but not only was it so small as to prevent more than one or two words per line, it was also well hidden behind a line of trees planted to provide a nice entrance view of the center.

For its day, the 2,142-seat Parkside 8 was very nicely equipped. The boxoffice faced west (to the everlasting misery of the afternoon cashier) and opened to the outside with entrance doors located on either side. The lobby was small and before long cluttered with video games. The theatre was, in effect, a pair of quads. As you walked in the door, the #1 house was to the left and seated 302. Past it was the entrance to a long hallway that led to #2 which seated 171. Just past that entrance was a door with a shorter hallway leading to #3 with 220 seats. Facing the lobby was the double sided entrance to #4 which seated 378. In the middle was the concession stand which faced the front doors. To the right of the stand, #’s 5, 6, 7, and 8 were lined up in a mirror image of 1-4. Restroom sets were located next to 1 and 8. As was the GCC style of the time, the walls were dark blue with dark gray and red trim. The carpet was dark blue with red trim. This resulted in the lobby requiring a lot of lighting which explains the 50 or so lighting fixtures in the ceiling. The upstairs held the theatre offices and as an added thrill for the theatre staff, a long hallway with 10 separate offices and a major phone and computer support setup. This suite held the southeast region division offices for GCC.

The booth was state of the art for its time, and GCC usually kept it that way. Screens 1, 4, and 8 had standard Dolby, while #5 had Dolby SR and a THX operating certificate. In the following years, standard Dolby systems were removed from two of the Hairston 8 houses and installed in #’s 3 and 6. #1 received a SDDS system while # 4 got a DTS and #5 a Dolby Digital reader. Later the soundracks for 1, 4, and 5 were modified and the processors put on wheeled cabinets so that any of these formats could play in any of these theatres. No new readers were added which meant that the readers had to travel with the processor and be remounted with each move. Still later, the SDDS was removed from #1 and DTS added to #’s 1 and 8. The THX operating certificate was kept intact by GCC through all of these developments. The projectors were Cinemeccanica V8’s with the exception of #5 which had a V5 35/70MM unit. All platters were Christie Autowind 3’s. An interlock system was included which allowed the showing of the same print in a variety of combinations. The most that could be run at once was six (#’s 2 through 7 which all faced the same way.) The most I ever ran was three although as a test I did run all six once. This was a very common practice in the days before multiple print bookings, and I don’t recall ever having a problem.

From the time it opened, business was only OK at best. The dominant demographic of this area is 40 and older which leaves out the bulk of the movie going audience. As is always the case, a hit movie like “T2”, “Back To The Future 3”, “Dances With Wolves”, etc… will do business anywhere just as they did here. I believe the biggest hit of these days was “Apollo 13”, a hit everywhere, but especially among older audiences. However, Parkside 8 was located in the center of a circle formed by Phipps Plaza / Lenox Square, Perimeter Mall, North Point Mall, and Cumberland Mall with all of their associated screens all playing day and date with Parkside 8, and the movie going population of Sandy Springs was not enough to make this location a big money maker. Within a year the decision was made to change the name from Parkside 8 to Sandy Springs 8, the old Sandy Springs Theatre being long gone by this time. This might have made the general location easier to pinpoint but did nothing to make the place any easier to find.

For 12 years this site went about the daily grind, accumulating the usual assortment of managers, employees, and humorous stories common to all theatres, but in 1999, GCC declared bankruptcy and closed all of their Atlanta locations except the brand new Parkway Point. As with all bankrupt lease breakings, GCC had to pretty much just walk out and shut the door behind them, leaving the set up intact. (The projectionist of the moment, on vacation and unaware of what was happening, had to make some kind of arrangement with the court or sheriff to get his personal belongings out of the booth when he returned to find himself out of a job.) The Parkside 8 was closed in 2000 and the site sat vacant for over a year until an outfit known as Entertainment Film Works, which was running the old Hairston 8 as a dollar house, reopened Parkside 8, also as a dollar house. This lasted only for about a year during which the condition of the site became pretty shabby. EFW’s departure was followed by another long period of darkness until spring of 2003 when a small art house chain known as Madstone Theatres took over the lease. Madstone Theatres completely remodeled the lobby to turn it into a coffee house / deli type of operation. Not needing so many seats for art films, they reseated the #4 and #5 auditoriums so as to allow a world of room in between each row. They also removed seats from the back of each house and poured concrete platforms to provide for wheelchair seating. This left the seating capacity for the houses at about 302. 288, 211, and 159. In the booth, red light readers for the upcoming cyan soundtrack prints were installed, and Odyssey hearing impaired systems were added to each house. It is also possible that this is when the DTS units were added to 1 and 8. The THX certification for #5 was long gone by this time.

Madstone Theatres reopened it on April 25, 2003 with, among other things, a circa 1977 print of “Days of Heaven”. Madstone Theatres did pretty good business here showing a combination of art and wide break popular movies. They had a loyal, older, clientele and I was told that it was the best performing of all Madstone Theatres sites. Despite this, there were evidently some serious problems with the company, and in late-April of 2004, the employees showed up for work only to be told that this was their last day in operation. This time the theatre did not stay dark long as George Lefont, a well known local independent and art house operator took up the lease. After the requisite cleanup and preparation, the place reopened as the Lefont Sandy Springs in June of 2004.

After falling into disrepair, the theatre again changed hands in November 2017 when a local independent operator acquired it and renamed it Springs Cinema & Taphouse. A $2.5 million renovation occurred over the next year that included gutting the lobby and auditoriums and installing many modern and upscale amenities such as heated reclining seats with reserved seating, numerous ticketing kiosks, larger screens, a full bar serving craft beers, wine and cocktails, and a kitchen serving an array of appetizers, pizzas, sandwiches and more. The theatre very much has a local feel to it and has become a popular destination for residents of North Atlanta for corporate and community events and a wide variety of movies ranging from independent/art films to more commercial content.

Great and Interesting Story on one of my old employers GCC.Thanks Stan.

I worked here a few times when they were GCC. I was an “expert” cashier – I could sell movie tickets fast, and my drawer was always even… I worked at GCC gwinnett. I enjoy going here now because it reminds me off all my days working for GCC. They also serve beer and wine!

The Parkside 8 was one of eight multiplexes designed for General Cinema by architect James Thomas Martino.

This Theatre is Now as The Springs Cinema & Taphouse, & it Previously Operated by Lefont Theatres.

An article I found said that the manager, the great Bill Tush, will continue in his roll. If you don’t remember his show “TUSH” or his time on the Superstation go to youtube, you won’t regret it!

General Cinemas closed it in 2000.

April 25th, 2003 grand opening ad as the Madstone at Parkside in the photo section.

On December 16th, 1991; Fulton County Police Interrupted A Robbery With 3 Gunmen In This Theater. 2 Robbers Fled And 1 Ran Into The Theater. Patrons Left The Theater, An Atlanta Braves Player Was One Of The Moviegoers At The Time. The Gunman Was Never Found At This Moment.