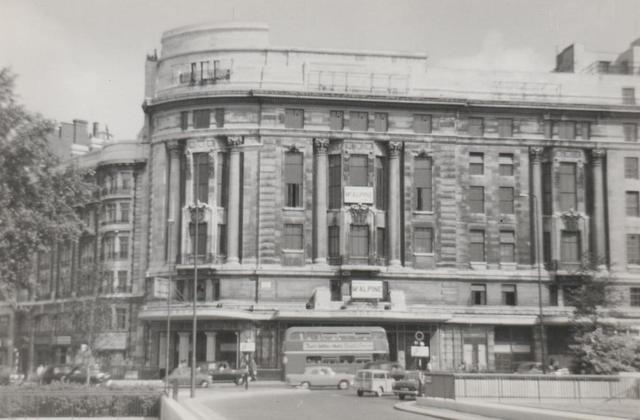 The Regal Cinema was built for A.E. Abrahams & his son David A. Abrahams and was the first to open in a small chain of Regal Cinemas in London (others being at West Norwood, Uxbridge and Edmonton). The Regal Cinema Marble Arch opened on 29th November 1928 with Al Jolson starring in “The Singing Fool” which ran for 10 weeks before transferring to the Piccadilly Theatre. The architect was Clifford Aish, assisted by Frederick Ernest Bromige, and they designed an imposing structure located on the corner of Edgware Road and Oxford Street that had three entrances. Construction took seventeen months.

The interior decorative scheme was the work of Charles Muggeridge who created what is known as an Atmospheric style, which in this case had the setting of a Roman temple that had glades of trees and garlands of creepers that were visible behind the colonnade on the side walls. The ceiling had a massive pergola which was covered in golden creeper, through which could be seen an imitation sky with twinkling stars and cloud patterns.

The Regal Cinema was equipped with a Hill, Norman & Beard designed Christie 4Manual/36Rank theatre pipe organ, the largest in Europe which was opened by Quentin Maclean. There was a fully equipped stage. Other facilities were the provision of an enormous restaurant on the second floor with windows overlooking Marble Arch, a Chinese-style Orient Lounge in the basement, and the Blue Tea Lounge and Soda Fountain on the first floor.

On 28th September 1929 the Regal Cinema was taken over by Associated British Cinemas(ABC), who operated it until early-January 1945. Odeon Theatres then took control and refurbished it, but before they could re-open, the Regal Cinema suffered damage from one of the last flying bombs to hit London and it remained closed until 9th September 1945 when it re-opened as the Odeon Marble Arch. On the 17th November 1949 the Royal Film Performance was held at the Odeon Marble Arch for the first and only time. Attended by His Majesty King George VI, the Queen Consort Lady Elizabeth Bowes-Lyon and the Princess’s Elizabeth & Margaret. The film chosen was Errol Flynn in “The Forsyte Saga”. On the stage was a production “Cinderella Meets the Stars” which featured names such as Margaret Lockwood, Gregory Peck, Anna Neagle, Roasalind Russell, Walter Pidgeon and Michael Wilding. A host of famous film stars and guests from the UK & USA also attended.

On 20th March 1953, the Odeon Marble Arch was the first cinema in the UK to screen 3D when “Bwana Devil” was screened using two projectors running at the same time following a fourth projector being installed. On 14th January 1954 it became the second cinema in the UK to install CinemaScope when Marilyn Monroe in “How to Marry a Millionaire” was screened. It was then taken over by 20th Centrury Fox for one year to showcase their films. It reverted back to the Rank Organisation from April 1955. In 1958 on the final day of a successful run of Elvis Presley in “King Creole”, a small section of the ceiling came down, but it re-opened the following day with the premiere of “Rockets Galore” starring Jeannie Carson. The Rank Organisation were preparing plans to demolish the cinema and build shops and offices on the site, but planning permission was refused on two occasions.

The Odeon closed on 22nd March 1964 with Richard Widmark in “The Long Ships”. It was demolished, to be replaced by an office block and a new modern single-screen Odeon Marble Arch (which has its own page on Cinema Treasures). This new Odeon operated until it closed as a five screen cinema on 8th May 2016 and was demolished in October 2016.

The rebuilt Odeon Marble Arch was a gem…Saw Oliver there in the 60’s and The Doors and Terminator 2 there in the 90s…The decline of 70mm and roadshow style attractions made this theater hard to programme towards the end…it day dated a lot with Odeon Leicester Sq and rollout runs but lost its exclusive feel therefore plexing was the way to go. The plexing isnt terrible but no joy – have seen Speed 2 and The Tailor of Panama here. The programming is generally along the lines of a wide rollout keeping in mind the neighborhood is now made up of primarily upscale Middle Easter residents

scroll down to page 11 to see vintage photo of organ console on stage:
View link

I was told by a high up Rank contact I dealt with regular. That there is or was an interesting conditon on the lease from the Freeholders. That a number of Seats had to be on permenantly reserved for them…