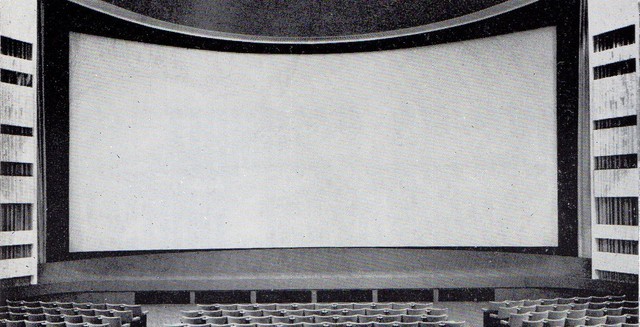 The Odeon Marble Arch opened on 2nd February 1967 with Zero Mostel in “A Funny Thing Happened on the Way to the Forum”. This was a lavish (for the time) replacement of the previous magnificent Atmospheric style Regal/Odeon on the same site (which has its own page on Cinema Treasures). It had a massive curved screen (75 feet wide x 30 feet high) and seeing a 70mm print here was stunning. The original seating capacity was for 1,360 in stalls and circle levels.

The new Odeon Marble Arch was part of a much larger development on the site which included shops and an office tower.

The auditorium was at first floor level with retail outlets occupying the ground floor. The walls were open panels with curtaining behind lit in different colours. On 21st March 1967 saw the World Premiere of “The Honey Pot” starring Rex Harrison. On 4th May 1967 a Gala British Premiere was held for “The Professionals”. On October 16, 1967 the Royal World Premiere of “Far from the Madding Crowd” was attended by HRH Princes Margaret. On 22nd December 1969 the Royal Charity Premiere of “Hello Dolly” was attended by HRH The Duke of Edinburgh.

Sadly, the Odeon closed rather suddenly in September 1996 and the auditorium was carved up into five small screens. Re-opening on 3rd January 1997, screen 1 in the front stalls area with 254 seats, 2 (119 seats) and 3 (173 seats) are the former rear stalls under the balcony, whilst 4 and 5 are in the balcony with 229 and 239 seats respectively which reduced the total seating capacity to 1,014 + wheelchair space.

It was a victim of being just outside the West End area and consequently this very fine cinema was, for all intents and purposes, effectively ruined.

In November 2014 plans were proposed to demolish the cinema and its adjoining office block. These were approved in early-2016, and the Odeon was closed quietly without any announcement on 8th May 2016. Plans approved are to build a new 6-screen basement cinema in the new building on the site. Demolition of the office and retail portion of the building began in late-May 2016 and the cinema was demolished in October 2016.

A few more demolition photos a few weeks later in the process (October 2016):–

Recall watching 70mm presentations of Aliens and Terminator 2 at the old Odeon, Marble Arch back in the early 90’s.

These days I’m watching the DVD boxset of the old TV serie The Prisoner (1967) with Patrick McGoohan. In episode #7, our hero escapes the village hiding in a truck. He wakes up and jumps out of the truck, to find himself in Marble Arch. In the background, we see the Odeon which had opened just one or two months before the shooting of the episode. The side of the cinema is the one on Oxford Street, facing the Arch. We can see the title of the film THE HONEY POT.

Why shoot the scene there? As The Prisoner was considered new in many aspects, was it intentional to present a surrounding in phase with the novelty of the serie by showing the newly re-built cinema with the modern concepts it featured (integration to an office center and shops, equipment in Dimension 150) ?

Incidentally, in the serie, the screen in one of the control rooms in which they spy on the population using a network of cameras is surrounded by masking and tabs, indicating that, if they cared that much about presentation, the villains were not that bad. :–) More likely, the tradition of presenting moving pictures in such conditions typical of the times was reproduced in the serie by its production designers, probably not even thinking especially about it…

Yet other pictures of the OMA when it opened. It’s the first time I see the auditorium photographed under that angle, and how the foyer was back then.

Side view of the stalls

Refreshment kiosk on the first floor 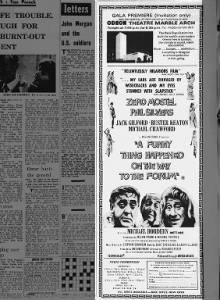 Reopened with 5 screens on January 3rd, 1997. Another ad posted.

Similar shape it may well be… but lacking in elegance or proportion.