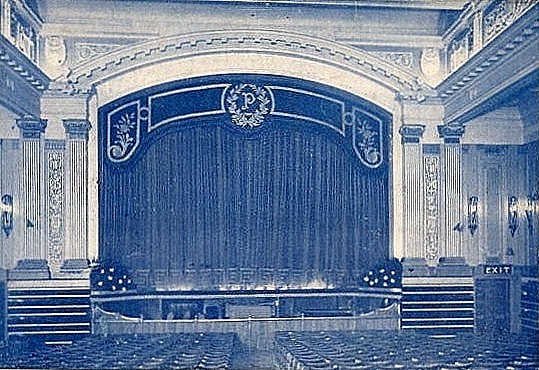 Located on the south side of Oxford Street, at the western end by Marble Arch. The Marble Arch Pavilion was opened on 30th May 1914. It was built for and was operated by Israel Davis, who had a small chain of ‘Pavilion’ cinemas in and around London.

The façade was only one storey high, and had an entrance, supported by Corinthian columns. The auditorium was below street level, and seating was on a single raked floor, plus there were six private boxes containing seating. The proscenium was 36 feet wide, the stage 12 feet deep and there were three dressing rooms. The cinema was equipped with a Jones straight pipe organ, and there was also a tea room/café.

It was a popular and prestigious cinema, which on 10th November 1924, became the first cinema to be attended by the King and Queen. King George V and Queen Mary viewed the epic film “Zeebrugge” from a private box. Rudolph Valentino made a personal appearance at the Marble Arch Pavilion in 1925, which caused riots!

On 5th June 1927, the Marble Arch Pavilion was taken over by the Gaumont British Theatres Ltd. chain, together with all other Davis circuit cinemas. Plans were drawn up by Frank Verity to add a balcony, but these were not implemented. A Christie 3Manual/10Ranks theatre organ was installed, replacing the original Jones organ. The cinema was one of several Gaumont operated cinemas to be used for trials of the Baird system of big screen television in 1939 and 1939.

It was briefly closed between September and November 1940, due to war-time conditions. The Christie organ was removed from the cinema in 1948, and was shipped to South Africa.

In the Spring of 1952, it was taken over by the independent Archway company, and began programming Continental films. The building was sold to Montague Burton tailors, but continued as a cinema. Burton’s sold the site in September 1954, and the Marble Arch Pavilion was closed on 24th March 1956 with Giselle Pascal in "Fire in the Skin"(Le Feu dans La Peau).

It was soon demolished and was replaced by a row of low-rise shops, which in the late-1980’s had become a Virgin Megastore. In 2008, the building is divided into various retail use, and is known as Surprise, Surprise.