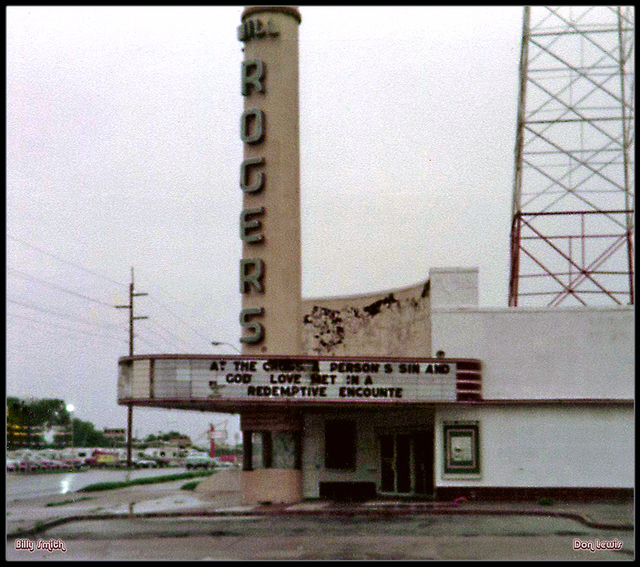 The Will Rogers Theatre was open from 1941 until 1976. The exterior featured a tall tower over the entrance, which bore the theatre name. Inside the foyer was a framed portait of Will Rogers on hoseback with a lasso. Inside the auditorium seating was all on a single floor. There was a Navajo pattern stenciled along the stepped ceiling, and on the side-walls were stenciled figures on horseback.

When OKC’s Will Rogers Theater opened in 1946 it was billed as sister to Tulsa’s WILL ROGERS. Though both structures were designed by Dallas Arhitect Jack Corgan, and were very similar in design, they were in no way identical.

The Beryl Ford Photograph Collection traces Tulsa history from a tough wild west town to a sprawling city. Depending on how far away you are from the date posted here, a blurry demolition picture of the Will Rogers Theatre can be found on page 63, image #752. This collection is constantly evolving and image numbers do change regularly, so you may need to browse around a bit,
http://www.tulsalibrary.org/BFC/index.htm

Though it has been rumored that Griffith Amusement neglected their theatre interiors. It is also known that Griffith Amusement usually kept exteriors up to date, utilizing them as oversized billboards.
Long before the Will Rogers Theatre was to be torn down it was allowed to fall into decay -
http://www.tulsalibrary.org/JPG/E0145.jpg

Vintage images illustrate interior motifs for the Will Rogers as decorated in unique Western Impressionist Styling.
These dull B&W photos cannot bring out how auditorium hues were rich earth tones, with splashes of bright colour thrown in here and there for dramatic effect. All together it created an exciting setting in which to view a movie.

I attended the church (across the street) from this theater. The church eventually bought the building and used it for several years. They then tore it down and made a parking lot out of it, mostly because they couldn’t afford the upkeep and cost of renovations.

This is the only movie theater I was ever kicked out of and I was only nine years old!

My “boyfriend” took me to see “The Girl He Left Behind” starring Tab Hunter and Natali Woods. When the kissing started on the screen, Gene began whistling and stomping his feet. Less than two minutes later we were standing on the corner waiting for my mother to pick us up after a call from management.

Needless to say, that was the end of our “courtship”.

I worked at the Will Rogers Theater in Tulsa with Ben Kehe, Frank Pyro, Mickey Drake, J.C. Duncan and Margaret Wellman from 1969 to 1974 first as a ticket taker and later as the house manager. I have very fond memories of my time there because they were an extraordinary group of people to work with.

The auditorium was almost unaltered from the time the theater opened until it closed in 1976. The lobbies were updated multiple times. A very large oil painting of Will Rogers had at one time hung in the lobby but after being vandalized had been moved upstairs to the house managers office. I hope that painting was donated to either Will Rogers High School or the Will Rogers museum in Claremore.