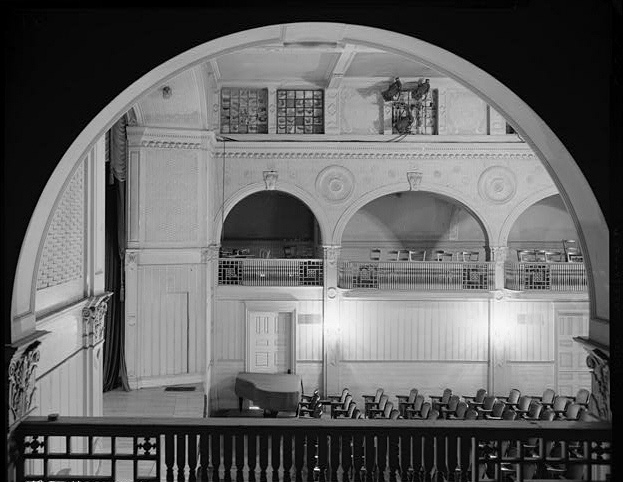 “The Theatre on the grounds was also built by Stanford White and was joined to the Court Tennis building by a connecting piazza porch. A visual masterpiece, it served as both a 500-capacity removable seat theatre and as a ballroom for dances. The interior was gold-trimmed ivory with a sky blue ceiling, decorated with golden stars. Attached were dressing rooms and a small utility kitchen. It was the scene of many artistic performances, both amateur and professional. Dances, recitals, poetic readings, shows and ballets were held for the adults, while children were entertained by vaudeville acts and magical mystifications”.

In addition to the above mentioned uses, the theatre also has a documented history as a movie theatre, during both the silent and sound eras, closing in 1987.

While the Tennis Hall of Fame has its entrance at 194 Bellevue Avenue, the Casino Theatre entrance is on Freebody Street, across from Freebody Park, once home to the Newport Jazz and Folk Festivals.

Restoration was completed by the Summer of 2010.

Here are some photos of the Casino Theatre as it is now.

That Flickers showing of The Shop on Main Street that I saw was on May 5, 1983. The film society was run, if I am not wrong, by George Marshall, who has been heading the R.I. International Film Festival for nearly a decade. Flickers also used other venues, including the Jane Pickens Theatre and a second floor hall off Washington Square that I forget the name of.

Four lovely photos of the interior of the Casino Theatre, an unknown treasure of Rhode Island.
ONE
TWO
THREE
FOUR

The Casino Theatre is scheduled to re-open, after an extensive restoration. READ ARTICLE

Gerard, thanks so much for the pictures and the article. This theater certainly means a lot to you. Since I am familiar with the Tennis Hall of Fame, I will look up the theater the next time I visit Newport.

The fact that the Casino was designed by Stanford White – and that it is his only theater that still exists – is really valuable information. It is also clearly documented in the article. Thus, the Casino’s architect is clearly not “Unknown”, and the site manager should accordingly add the great man’s name at the top of this page.

Site manager, thanks for the prompt response to my Stanford White request!

Gerald, do you know if the Casino has re-opened? If it has, do you know what events are being scheduled there?

Not sure, but I don’t think so.
There is a Casino restoration website. Perhaps that info will appear here at some point.
http://www.thestanfordwhitecasino.com/

Last week, on July 13, I attended a concert at the Casino Theatre, part of the Newport Music Festival dedicated to chamber music events each year. The concert, entitled “Notturno,” was well-attended. The opportunity to see close-up again this beautiful music box of a theatre was very much appreciated by all those present. The last time I had been inside was in the early 1980s.

This theatre should be listed as open.