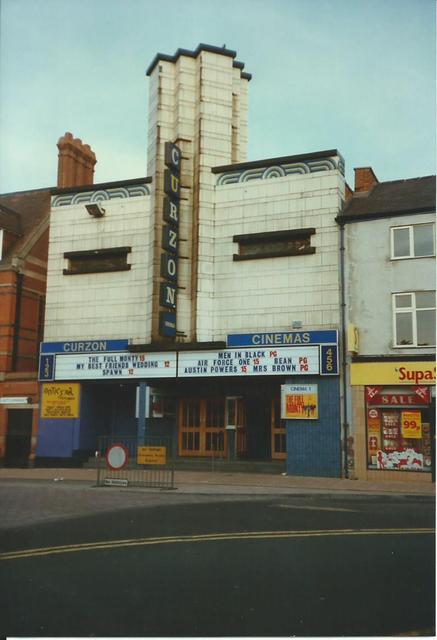 Originally opened as the Empire Picture House on 14th September 1914 with pictures and variety, it had a seating capacity of 1,000. There was a cafe in the building and tea and biscuits were served free to cinema patrons. In 1929 the facade was rebuilt to the designs of architect Francis C. Haynes and was in the style of two gabled houses with leaded windows.

In 1935 a new auditorium was errected at the stage end of the Empire, the cinema kept open during its construction and the last films played in the original cinema on 28th March 1936. The former old auditorium then became the foyer of the New Empire Cinema which seated 1,663.

The New Empire was designed in an Art Deco style by architect Archibald Hurley Robinson of Birmingham and it opened on 30th March 1936 screening Will Hay in “Boys Will be Boys”. Entrance was by a temporary entrance in the front stalls as the foyer (originally the old Empire auditorium) was being fitted out. When the entire building opened about six months later it consisted of the cinema, a Palm Court Ballroom and a restaurant.

The owner Charles Deeming sold the New Empire to the Essoldo chain in February 1953 and it was re-named Essoldo in July 1954. In 1966 the Essoldo chain were taken over by Classic Cinemas Ltd, but as they already had the former Odeon Loughborough re-named Classic, they used the name Curzon for the former Essoldo. When the Classic ex Odeon closed, the name was transfered to the Curzon.

The Classic was twinned in 1973 and in 1974 it went back to the name Curzon Cinema and additional sub-division took place up to 1985 when there were five screens seating: 420, 303, 199, 186 and 80. In recent years a sixth screen seating 140 was added in space that was formally the restaurant and the cinema was operated by Reel Cinemas, taking that name.

It was taken over by the Odeon Theatres chain on 4th November 2011, and re-named Odeon.

May have seen The Godfather here while visiting the UK in fall 1973. All I can recall is that the auditorium was steeply banked and the theatre was close to the train station and about a block away from a barbell club. Does this sound familiar to anyone? If so, please let me know if I have the right theatre.

What screen is now located in the front stalls? And is there any photographs of the auditorium in its original state?

Some images from 1990 when operating as the Curzon:–