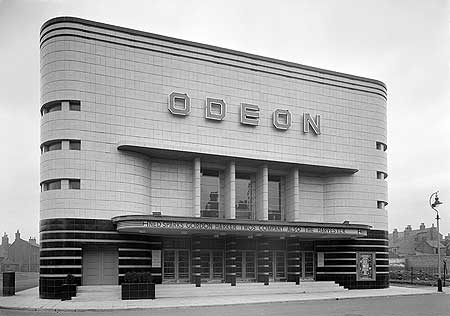 The Odeon Theatre, Loughborough was built for Oscar Deutsch as one of his original Odeon chain of cinemas. It was designed by architect Arthur J. Price out of the Harry Weedon Partnership of architects. It opened on 21st November 1936 with Gary Cooper starring in “Mr. Deeds Goes To Town”.

Seating was provided for 1,029 in the stalls on the ground floor and 596 in the circle. Decoration within the auditorium was minimal with troughs of concealed lighting and decorative bands along the walls. The entire exterior facade of the building was covered in Hathernware faience tiles manufactured locally by the Hathern Station Brick and Terra Cotta Company.

The Classic name was transfered to the town’s Curzon Cinema and the Classic (ex-Odeon) became a Mecca Bingo Club. It remains on bingo to date, now known as the Beacon Bingo Club.

A more detailed history and some photographs here:
http://www.merciacinema.org.uk/gallery0605.htm

Here is an exterior picture of the theatre when it was the Odeon, and here is one of the auditorium, both taken soon after opening in 1936.