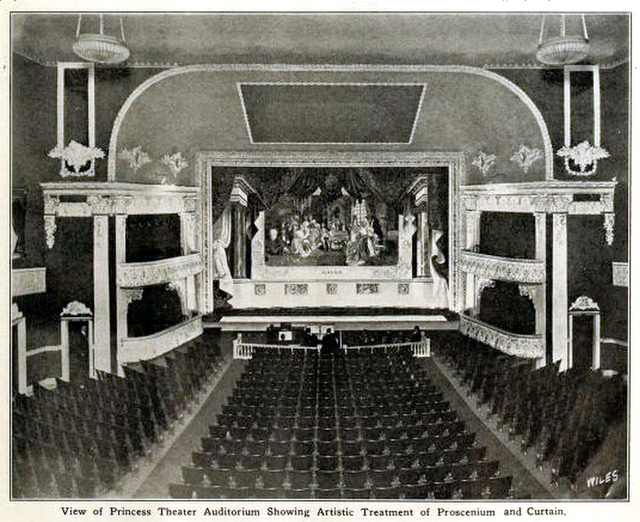 The Princess Theatre was opened on February 19, 1912. It was listed as residing at 511 Church Street in the 1917-44 Nashville city directories. The theatre reopened at 415 Church Street around 1949. In 1950 it was operated by the Crescent Amusement Co. On December 25, 1959 it became the Crescent Downtown opening with Howard Keel in “The Big Fisherman” presented in 70mm. It became a Cinerama theatre around 1961 and in 1967 it was taken over by Loew’s Inc.

Yeah Mike, me and Robin are friends on Facebook now maybe she could post my photos on there if she still has them. I have posted some theatre stuff on my page.Now back to the Princess Theatre not to be off topic.LOL.

My father worked at Florsheim Shoes, on the corner next to the Princess. The Jackson Bldg and that half-block was torn down to build Cain-Sloan Department Store. Florsheim moved around on 6th Ave N next to the Knickerbocker Theatre and the Princess moved down the block to the site of the old Grand Theatre. Like so much of the rich heritage of Nashville, the original site of the Princess and the Jackson Bldg is now an asphalt parking lot, adding to the bank account of Central Parking, Public Enemy No. 1 to Nashville’s architectural history.

Danny52: The original Grand was on Cherry Street (now Fourth Ave) north of Cedar (now Charlotte) and burned November 8, 1902. The name Grand was immediately carried to the former Masonic which was on the north side of Church Street at 422, whereas the New Princess was on the south side in the same block at 415 starting in 1951. There had very briefly been a Parthenon Theater on the south side at 411 in 1915-1916.

in 1915 a made in Nashville silent era movie in which Hap Sudekum, Lucille Wilson Sudekum and my relative Joshua Brown were in the movie was shown at the Parthenon.Ad appears 6-5-1915 in Nashville paper and 5-30-1915 paper that shows Lucille and Joshua.Believe Lucille was Mrs Harry Sudekum.Hap was Harry and Tony’s brother.

Harry Sudekum died young in 1930. His widow Lucille did not die until 1954 but is buried or entombed with him in the old Mausoleum at Spring Hill. Harry managed the Princess in its early days.

Clarence"Hap" Sudekum was the youngest of the Sudekum brothers and managed the Roxy all through the 1940s.

do you know of a snodgrass theatre that was in 1915 operational in nashville. Sam Davis movie was shown there.are there any of the sudekum family still alive.

the connor company was the production company of the sam davis movie. they sent 750 photos taken during production of the movie to the Library of Congress for copyright processing. in 2010 i discovered the library made these prints but only 15 images were saved.

After being acquired by the Crescent Amusement Co., the Princess changed its name to Crescent Theater (late 1950’s).

The Princess (at both locations) had always been a Crescent house since opening in 1912. The first manager was Will Ready, who had formerly managed their Crescent Theater on Fifth Avenue. The firm had used the name Crescent on several other theaters including a drive-in (Nashville’s first).

The Princess, after being a Cinerama for several years, was called the Crescent Downtown in its late days. After the Loew’s Vendome burned in 1967, Loew’s leased two of the Crescent theaters: the Melrose (thereafter Loew’s Melrose) and the Princess (as “Loew’s Crescent”). I am an old man and can barely see the screen so may have misspelled something here.