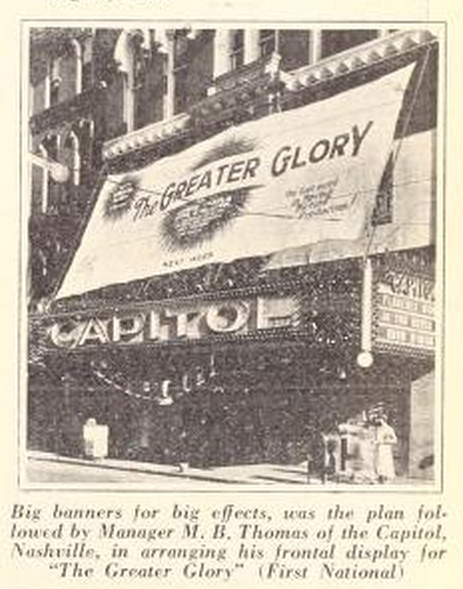 The Capitol Theatre was opened by the Crescent Amusement Company on April 19, 1926 with Richard Dix in “Let’s Get Married” plus vaudeville.

My father always said that when the Warner Bldg was built it was planned that a theater be there but what with the Depression etc it didn’t get done for many years. I rode through town the night the Tennessee was opened and saw the crowds but didn’t get to go to the gala opening at which some movie premiered.

By the way I believe the old Capitol occupied part of the Odd Fellows building at 6th and Church. The Odd Fellows Lodge might have owned the property as I seem to recall that it was simply leased for 100 years to the builders of the Warner building and I understamnd they had a Lodge on the top floor. They might even yet own the propertty. I think the high-rise condo building there is called the Cumberland- is this correct?

Thats the one Dave. The Tennessee Theatre has its own page on C.T.

Butch: The Paramount, the Tennessee, Loew’s and the “New Princess” were all operating during the 1960s. The New Princess was for a time called the Cinerama and after Loew’s burned in 1967, they took over the New Princess and called it Loew’s Crescent. I know the Fifth Avenue was out of business before the sixties but I cannot remember when the Knickerbocker closed. Some other oldster ought to chime in here on this.

TheatreOrgan: I just noticed you mentioned Leon Cole- I think it was spelled without the S – He was a very well-known organist around here in my youth, played the Centennial Park concerts etc. I believe he had a son who was killed in the war. Very talented musician.

Somewhere there is a mention of a “talkie” sound system being bought for the Capitol about the time it burned and the system then being installed in the Fifth Avenue.

There was a comment on the Paramount page about the Capitol.