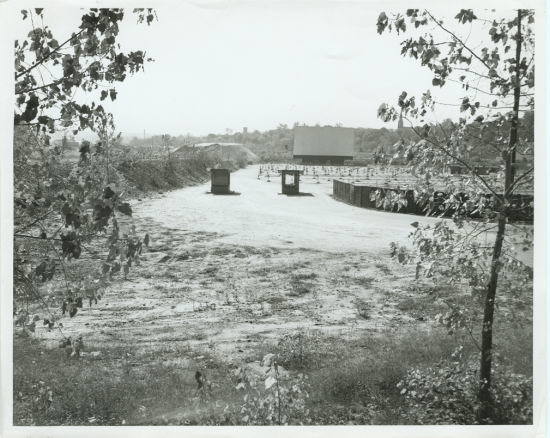 The Center Drive-In was located on the town-line of Ansonia and Derby. It opened July 2, 1953.

The Center Drive-in theatre was south of Division St. behind McDonald’s, where BJ’s Wholesale Warehouse is today. When I started coming to Ansonia in 1974 it was closed, but the “humps,” projection booth/snack bar, and speaker stands were visible for years. I don’t remember the screen. In 1955 these two rivers flooded and there was at least 10' of raging water over this property. It stood in the “center” of the V where the Naugutuck and Housatonic Rivers meet. Over the years, evidence of the drive-in crumbled, and BJ’s bought the land and built about 1999 (a guess.)

This was a rather huge Drive-in parking 900 cars and owned by B.Jacocks.

The Center Drive-In opened in the early 1950’s as I recall, and was located on the South side of Division St., along the Naugatuck river, just West of the Division Street bridge.
It was a very large area, and took up all of what is now BJ’s and the McDonald’s.

After the “Flood of ‘55”, the screen was re-built, the concession stand was cleaned up, repainted, etc. It operated for several years after that, into the 1960’s. Subsequently, it became a golf driving range for a few years.

When Robert Schwartz opened his Center Drive-In Theatre on July 2, 1953, he wanted to have the newest, largest and finest theater. He had “newest.” Largest was done with a massive 900-car lot. And finest was knocked down when the theater was Connecticut’s first built for widescreen film formats including CinemaScope. Frank McQueeney did beat him to it launching with widescreen to start his 1953 season at the Pine Drive-In in Waterbury.