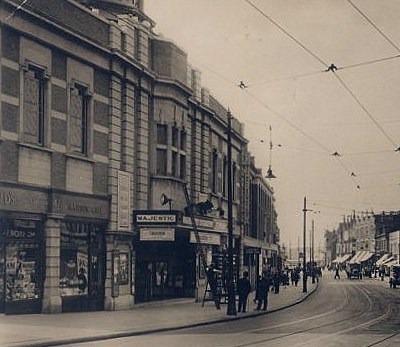 Located in Wembley, Middlesex, today a district in the north of Greater London. The Majestic Theatre was the first of a chain of five independently operated Majestic Theatres that were opened in outer London suburbs and the South East of England.

The Majestic Theatre opened on 11th January 1929 and had a seating capacity of 1,906. It was designed by architects J. Field and H.J. Stewart with the interior decoration by interior designer W.E. Greenwood (who was also on the board of directors of the company). Inside the auditorium the style was in an Italian Renaissance Atmospheric style. There was a John Compton Kinestra organ installed and the cinema also had a 500 capacity ballroom.

It was taken over by County Cinemas in 1935 and they in turn were taken over by Oscar Deutsch’s Odeon Theatres in September 1939. It was re-named Odeon from 25th March 1956 and closed on 27th May 1961 with the double bill programme “The Big Gamble” starring Stephen Boyd and “Days of Thrills and Laughter” a silent movies compilation.

The Odeon was demolished and a C & A department store was built on the site. The Odeon name was transferred to the Wembley Hall Cinema/Gaumont further along the High Road.