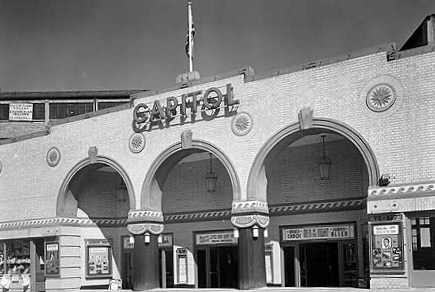 Located in Wembley, Middlesex, today a district in the north of Greater London. The British Empire Exhibition was held in Wembley in 1924, and as well as the famous Wembley Stadium being one of the buildings on the huge site, there were numerous other buildings containing exhibits from Commonwealth countries. 17-million people visited the Exhibition during the year it was open.

The Exhibition Conference Hall, Raglan Gardens, was converted into the Elite Cinema, seating 1,500 and opening on 21st March 1928. The building was so vast that it also included a dance hall and a restaurant.

It was re-built internally to the plans of architect James Martin Hatfield and re-opened in 1930, with a new seating capacity of 1,637, and a new name, Capitol Cinema.

Films were booked by Lou Morris and the cinema was owned by Capitol (Wembley) Ltd. In 1933, the Capitol Cinema was re-furbished and a Compton 2Manual/6Rank theatre organ was installed and the illuminated console was on a lift. It was opened by organist W.J. Hemsley. It was around this time that the Capitol Cinema was taken over by County Cinemas Ltd. and operated by an associate company known as Associated Theatres (Wembley) Ltd.

By 1937, Raglan Gardens had been re-named Empire Way and County Cinemas were taken over by Odeon Theatres Ltd., operated by Oscar Deutsch, but both companies were still operated independent of each other at this time.

In around 1942, the Capitol Cinema was leased to an independent operator Medway Cinemas Ltd. Stage shows were held on the 29 feet deep stage, adding to the film programmes. It seems that the cinema seating was removed in 1943 and the building used for billeting people dispersed from their housing during the war. This, despite the fact that cinema trade books still list it as operating until 1947! It was certainly closed in 1947, needing urgent repairs, which at the time were deemed unviable and eventually the building was demolished.

In 1942 the cinema was used by the Army Kinematograph Service as its exhibition headquarters and projectionist training centre.