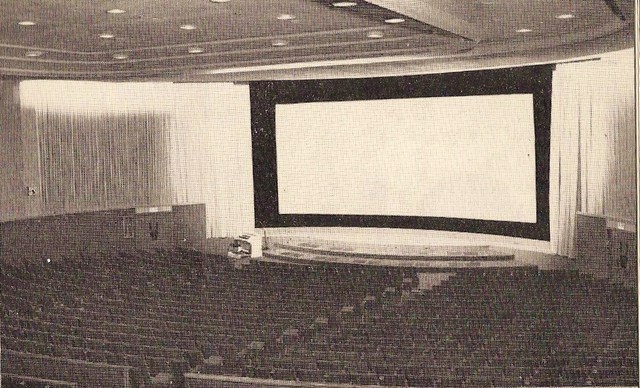 Located on the corner of Freeman Street and Duncombe Street. Originally on this site was the Prince of Wales Theatre which opened in 1886 and was taken over by Associated British Cinemas(ABC) in April 1936. It closed later in 1936 to be demolished to build the Regal Cinema. Opened by Associated British Cinemas(ABC) on 4th December 1937 as the Regal Cinema, it had an original seating capacity of 1,966, with 1,280 in the stalls and 686 in the circle. It was equipped with a Compton 3Manual/6Ranks theatre organ which was opened by Wilfred Southworth. The organ console was illuminated.

It was renamed ABC in 1961. In July 1966, the ABC was modernised and alterations took place. The new ABC occupied the balcony of the original cinema building and had a seating capacity of 1,231 when it re-opened on 18th March 1967. The former stalls seating area was converted into a Kwik Save supermarket and shops. The layout was unusual in that the circle started at the very rear of the stalls. The new cinema was also back to front - the original projection box was now above the proscenium, and became the plenum room.

The cinema was tripled (into 300, 225 and 130 seats respectively) in April 1980, and later went through many name changes including Classic, MGM and Cannon, before eventually becoming Odeon in 2001. Odeon spent 100,000 GB Pound rebranding the cinema, yet could not overcome its inherent problems caused by the extremely bad subdivision which led to the two small screens projectors being on angles to the screens.

Unfortunately audiences dwindled, the cinema was a constant attraction for vandals, and closed in 2004. Although there is now a multiplex 15 minutes drive away in Cleethorpes, the site was sold to a local businessman wanting to reopen it. In the Summer of 2009, further proposals were announced that the cinema could be re-opening, and it re-opened as the Regal Cinema in August 2009. Sadly, this was a short lived venture, as it was closed at the end of September 2009. By 2014 the former stalls area (supermarket) had been converted into an indoor skateboard venue named Ghettopark. The 3-screen cinema section remains boarded up and unused.

The cinema is still dark, as of December 2006, with no live plans to revive it.

The new cinema (Meridian Parkway in Cleethorpes) is further away than the editorial suggests – perhaps 15 minutes through urban traffic by car, but over an hour’s walk away.

I am seriously considering re-opening this up again as a cinema, could anyone give any advice on making it successful, i am not looking at it to make me rich, but obviously it isn’t cheap to run, wages, etc so any pointers would be most beneficial

I have loaded 3 pictures of the r-opening day 1967. which will help with discription

In April 1980 the triple cinema re-opened with The Empire Strikes Back, American Gigolo & Kramer vs Kramer. The last movie prior to tripling was Airport 80 The Concorde.

The ground floor of the Odeon Victoria Street had been occupied by McDonald’s since 1987.

Would jconnolly be a son of the one-time manager?

In 1968, while based at the Odeon, Harrogate, I was asked to relieve Mr Archer, the manager at Grimsby Odeon (former Savoy), for two days to allow him to take his days off while his assistant manager was on holiday. Compared to my “purpose built” Odeon at Harrogate, the Grimsby Odeon seemed small and rather old fashioned but was well run and very popular. The film showing while I was there was “The Jokers” starring Michael Crawford and Oliver Reed, a somewhat run-of-the-mill ‘60s comedy, nevertheless, the midweek evening performances were pretty full. There was a palpable “family” atmosphere amongst the staff who knew their manager affectionately as Dan – after Dan Archer in the radio serial, “The Archers”. The screen frame was erected in front of the original, rather small, proscenium arch (presumably from the advent of CinemaScope)and, unusually, there had been no attempt to create a new proscenium – hard or soft – and the floor-mounted curtain motor was even partly visible. When the curtains were opening or closing, the sound was quite loud in the auditorium. A lovely, well-tended cinema.

FanaticalAboutOdeon: Your comment actually relates to the former Savoy/Gaumont/Odeon, which has its own page on Cinema Treasures as the Focus Cinema.

I dont suppose anyone has any more pictures of this Cinema? The foyers, screens intact etc?