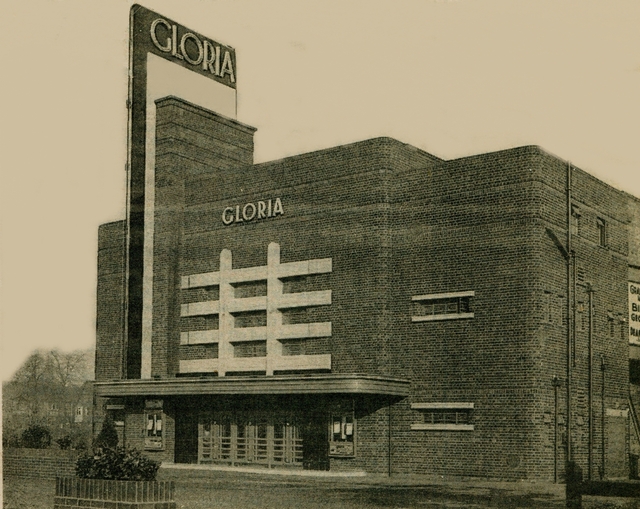 Built by independent the independent Eskay Group chain, this was located in the expanding Derby suburb of Chaddesden, backing on to Chaddesden Park on Nottingham Road, opposite Meadow Lane. It opened as the Gloria Cinema on 21st November 1938 with George Formby in “I See Ice”.

It was a modern Art Deco styled cinema, designed by architect Alfred J. Thraves of Nottingham. The main feature of the exterior was a slim 60 feet tall tower that had the cinemas name at the top. The entire building was outlined in neon strips which shone out at night. Inside the auditorium the decorative features were grilles and decorative plasterwork depicting shells, bulrushes and other plants in an Art Deco style. Lighting was via indirect troughs of hidden lighting across the ceiling.

The cinema had a full size stage that was put to good use during the war years and post war, when Sunday one day Variety shows were held starring ‘big names’ like Jack Warner, Sandy Powell, Wee Georgie Wood, Jimmy James, Vera Lynn and Izzy Bonn. One evening Ted and Barbara Andrews were appearing on stage and introduced their 14 years old daughter Julie to the audience and she entertained them with a song.

In November 1951 the Gloria was taken over by the Essoldo chain and re-named Essoldo Cinema. Sadly they allowed this once beautiful suburban cinema to get very run down. The guttering leaked allowing water to seep into the side walls of the cinema, projection breakdowns occurred at almost every performance, the boiler broke so there was no heating in winter. But it had its own loyal, but dwindling followers who would turn up, particularly on Sunday’s when double bills of old 1940’s and 1950’s horror films were screened.

The Essoldo Cinema closed on 14th September 1968 with a screening of Spencer Tracy in “Guess Who’s Coming to Dinner”. The building remained closed and shuttered for six years until it was taken over by an independent bingo club operator and re-opened as the ‘Lucky Seven’ bingo club. Initially it was a success but eventually patronage waned and it was taken over by the Ladbroke Group and was re-named Gold Mine Bingo Club. Due to lack of maintenance over the years the slender fin tower on the front exterior had to be shortened as pieces of brickwork were beginning to fall off.

The circle area was divided off into two mini-cinemas seating 144 and 138 and re-opened as the Ladbroke Film Centre on 6th December 1974.

They closed on 31st December 1982 with Cloris Leachman in “Herbie Goes Bananas” and Michael Crawford in “Condorman”. Bingo continued in the former stalls area, operating as a Top Rank Bingo Club until it closed on 15th October 2000. The building stood unused, suffering 3 fires in December 2000 and was demolished in March 2001. An Aldi supermarket now stands on the site.

Hi Ken, a correction – one of the closing films was “herbie goes bananas” the derby evening telegraphs witty headline was NOBODY GOES BANANAS AS CINEMA CLOSES. At some point in the late 80’s the building had a lot of money spent on it and the mini cinemas were removed and the whole building was opened up to bingo, I think at this point it was called Cascades Bingo.
It was only demolished a year ago to be replaced by a supermarket, a fate that had befallen its nearby competitor the Majestic – another terrific deco super cinema with a similar fin tower. Derby was very lucky to have some amazing cinema buildings, virtually all of which have now gone.
Interesting note – if you look at photos of the Gloria you can see that the brickwork above the deco grill is a lighter colour, this is where it received bomb damage in the war and a large curve of brickwork was replaced.

Hi Woody; Thanks for the Herbie correction, I thought ‘Goes Back’ didn’t sound familiar (details were taken from Sam Winfield’s book ‘Dream Palaces of Derby’).

Yes you are correct that the building was called Cascades Bingo at some stage, this was before Top Rank Bingo, the last operators, who closed it down on 15th October 2000. According to my records, the building was demolished in March 2001. Prior to demolition, the disused building had been set on fire three times in December 2000.

I have posted the Majestic Super Cinema, Chaddesden and the Rex, Alvaston (my local for the first 21 years of my life when I lived in Derby) onto Cinema Treasures. More to come…..