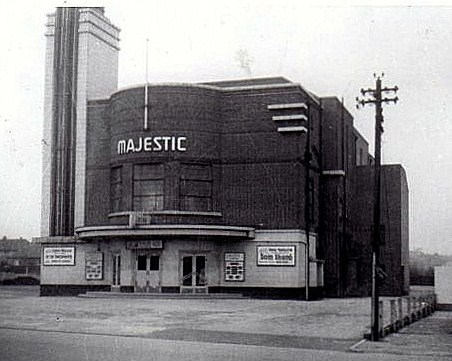 It opened on 14th April 1938 with Gracie Fields in “Looking on the Bright Side” and was the first of three Derby cinemas to open in 1938 (the other two were the Regal Cinema (ABC) in the City centre and the nearby Gloria Cinema which was also in the suburb of Chaddesden).

The main architectural feature of the Majestic Cinema was a 70 feet tall fin-tower that was located to the left hand side of the facade. The cinema’s name was on top of the tower in chrome letters inlaid with red neon. A large curved bay frontage had windows that let light into the circle foyer.

Inside the auditorium the lighting was from a series of four stepped coves in the ceiling and concealed lighting at the sides of the proscenium opening. There were some decorative grilles on the splay walls which were backlit.

Initially built and operated as an independent, the Majestic Cinema was taken over by the Leeds based Star Cinemas circuit in 1950. It remained a successful cinema until TV began to take a bite on cinema going audiences in the mid-1950’s and prgrammes went from ‘Sunday for 7 Days’ to twice weekly changes with seperate film shows of old features on Sundays for 1 day only. Regular live shows were introduced on the stage on Sundays that featured up and coming Rock ‘n Roll singers such as Terry Dene and Marty Wilde and these proved popular with hordes of screaming female fans surrounding the cinema which resulted in the police being called to keep control.

Wrestling matches were also staged on Sundays but this didn’t last long and with a dwindling(and ever more rowdy) audience, the Majestic Cinema closed on 28th April 1962 when only 138 patrons watched the final show; Leslie Caron in “Fanny”.

It was stripped out of all its fittings and remained empty for a few months until it was demolished and a Fine Fare supermarket was built on the plot of land. In more recent years this became a KwikSave supermarket. By 2018 it was a Nisa Extra supermarket.