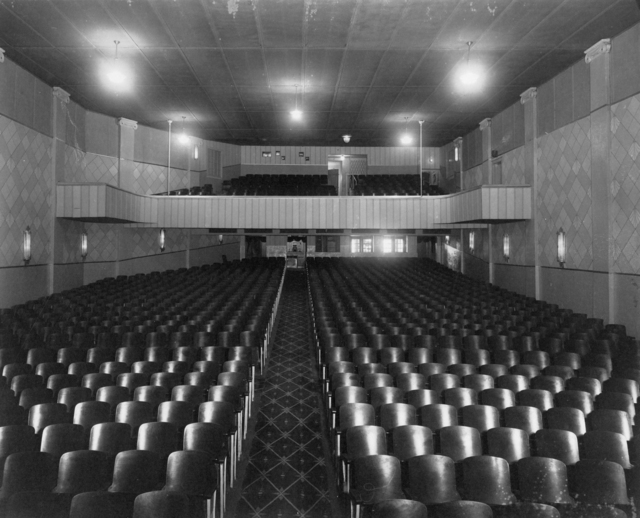 Built by Michael Cianciolo, Sr. and opened in 1929 on an oddly shaped pointed lot on Jackson Avenue and N. Watkins Street. The Rosemary Theatre had a ‘colored’ balcony with a side entrance. Its neon display had no rival among the neighbourhood theatres until the Crosstown Theatre was built, and it was a beloved and successful theatre.

The Rosemary Theatre was closed March 28, 1965 with Gregory Peck in “Behold a Pale Horse” & Warren Beatty in “Lilith”. It was demolished. It was named after the oldest of the Cianciolo sisters. Sometimes confused with the Rosewood Theatre, they were two entirely different buildings with different histories.

The way I heard it from Memphis show business old-timers, both the Rosemary and the Luciann (q.v.) were built by Augustin Cianciolo, a Memphis movie entrepreneur who named them after his daughters. The Rosemary appeared to be a little older and a little more ornate, in the late 1920s or at least pre-WWII style—in contrast to the stark, functional-looking Luciann. A script addition to the big “Rosemary” sign read, “A Cianciolo Theater.” I remember the lobby and restrooms as being very cramped. It was at the intersection of Jackson and Watkins, a mile or two West of the Southwestern campus, and I used to walk there and back to see the show (hey, I was on the cross-country team!) Saw “The Great Escape,” the original “Manchurian Candidate” (beware of imitations), Glenn Ford and Stella Stevens in “Advance to the Rear,” and Peter Ustinov and Melina Mercouri in “Topkapi” there, all first run I believe. My friend Bill Kendall who managed the Guild theater (q.v.) had grown up right across the street from the Rosemary and said he went there almost daily as a kid. This experience helped make him perhaps the greatest movie afficionado in the entire Memphis area. The Rosemary was still standing in 1973, but was torn down not long after and replaced by a branch of First Tennessee Bank. That lasted only a few years and was itself closed and then demolished in the early 80s. Until I left Memphis in 1983 I used to bicycle down Jackson Avenue occasionally, but don’t remember anything special there in the later years. Too bad.

Bill Kendall was a great showman. I remember him at the Guild mincing in the lobby for years. A true “Old Auntie”

The March 22, 1952, issue of Boxoffice Magazine has an article about Augustine “Gus” Cianciolo and the new Plaza Theatre, then nearing completion, which Cianciolo would operate under lease. It said that the Rosemary had been operated by Gus’s father, Michael, and that Gus had taken over full operation of the house in 1939. Michael Cianciolo probably did open the Rosemary in 1932, as the Boxoffice article said that Gus, 31 years old in 1952, had “grown up” at the Rosemary, helping out at the theater from the age of 11.

The item also mentioned that the Cianciolos opened the Luciann Theatre in 1941. Gus was still operating both of these houses in 1952 when the Plaza opened. Michael Cianciolo died in 1943, according to a brief notice in the August 7 issue of Boxoffice that year.

Mike Cianciolo apparently ran a Memphis movie house called the New Theatre prior to operating the Rosemary. The New Theatre at Memphis, operated by Mike Cianciolo, was listed in the March 11, 1930, issue of Motion Picture Times, in an item about theaters that had installed quiet, talkie-friendly ventilation systems during the previous year. I don’t see the New Theatre listed at Cinema Treasures yet.

My name is Michael Nickas, son of Rosemary, Grandson of Mike Cianciolo and nephew of Augustine Cianciolo.

The theatre was named after my mother, (never referred to as the Rosewood).

I have recently discovered the only know photo of my mother’s theatre. My Grandfather (Mike Cianciolo) built the theatre and my Uncle learned the business there.

I would be happy to share all that I have.

The Rosemary theatre was never known as the Rosewood. As a young man I frequented both the Rosemary and the Rosewood, and the later was located in South Memphis on Lauderdale Avenue. The Rosewood was of later design and construction, with some dark marble front. Also, the Rosewood was much larger. Of Course, Mr. Nickas is entirely correct in his historical comments. Another question, if I may…does anyone remember “Ronnie, the Rosemay Kid?” He was a mentally-challenged young man who was almost a fixture at the Rosemary. He just came to my mind, and I wondered if others remembered him.

They’re were eight surviving Cianciolo Children. Oldest to youngest: Frank, Annie, Virginia, Michael, Augustine, Marguerite, Rosemary and Lucia. The Rosemary was named after my mother, the 2nd youngest Cianciolo child. All of the children were loved equally and great effort was taken by their Mother Lebora Sansone Cianciolo to make certain all were given equally. My mother Rosemary, I’ve been told had a special place in her father’s (Michael Cianciolo’s) heart for which the Theater was named. The Plaza and the Luciann ( named after my Aunt Lucy and Aunt Ann) were Cianciolo theaters as well. My Uncle Frank and Uncle Augustine continued the legacy which also included bowling alleys and liquor stores. The last surviving Cianciolo children Rosemary Cianciolo Nickas, pasted away in Jacksonville, Florida on June 3, 2008 followed my Aunt Marguerite Cianciolo passing away on Thanksgiving eve, 2008 in Memphis, Tennessee.

The Rosemary was still operating into March. 1965. I think that’s when it closed. A Hard Day’s Night was not its final attraction (unless the Rosemary continued to operate without running an ad in the newspapers). A Hard Day’s Night did play first Memphis run at the Rosemary as part of a saturation opening around August, 1964. I think it was also simultaneously at the Park and Lamar theaters and at several drive-ins.