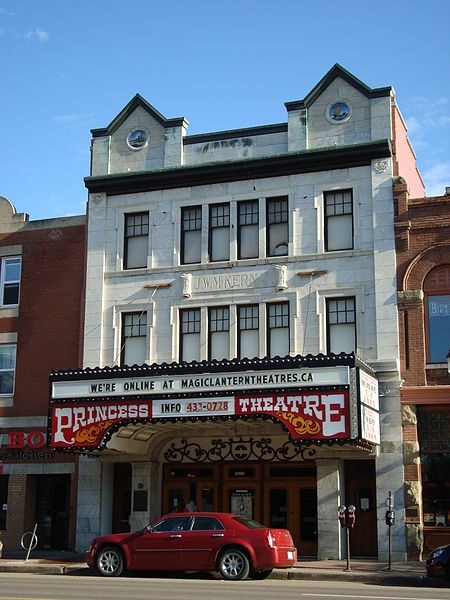 One of two Edmonton theatres called the Princess (the other was on Jasper Avenue downtown), this venerable house in the old Strathcona district opened on March 8th, 1915 with 638 seats. The original owner, John Wellington McKernan, hired local architectural firm Wilson and Herald to design his small but lavish theatre, which featured both movies and, according to the advertisements of the time, “…a sprinkling of good vaudeville and musical entertainment” on what was reputed to be the largest stage in a cinema theatre in western Canada. The three story building was faced with white British Columbia marble.

McKernan became a victim of the Spanish influenza epidemic in 1918, but his family continued to operate the Princess until 1957. Vaudeville was abandoned at the theatre after 1918, and as the Strathcona neighborhood slowly slipped into decline, the Princess became a second run movie house, although it was the first Edmonton theatre to show a talking picture. It was the only theatre south of the river until 1939.

The new owners who bought the theatre in 1957 were unable to make a success, and the Princess Theatre soon closed. Its lobby was converted to retail use, and the auditorium stood empty for over two decades. In 1970, the theatre was purchased by Towne Cinema Ltd., and the renovated house was re-opened as the Klondike Cinema on December 24, 1971, but it continued to show second run movies and, when this failed to attract sufficient patrons, the theatre began to show adult films.

A community group involved in local renovation, the Old Strathcona Foundation, leased the Princess Theatre and reopened it on February 10, 1978 and then purchased it in 1982. After many years of struggle, the restored theatre began to rebound, becoming Edmonton’s leading art house and an important attraction in the lively entertainment district which has developed in Old Strathcona. In 1999, a second screen was added with the construction of a 90 seat theatre in the basement. The Princess Theatre is now operated by Magic Lantern Theatres.

The Princess was operated during most of its first period of life by Famous Players. The Mckernans did operate it initially but not for long. Famous closed the Princess in 1957 because its “nickelodeon” design with a very long, narrow auditorium and minute screen could not be brought up to date to compete with TV (it was never converted to cinemascope under the Famous Players operation).

There are several theatres in Edmonton that have claims to the first sound exhibition…..and I would doubt that any claim the Princess makes is credible.

When Famous Players closed the theatre (they closed several Edmonton theatres about that time; victims of TV) it was converted to a store; a TV store in fact. Much of the balcony was demolished, and the interior was gutted.

In 1968 Hector Ross and his Town Cinema Theatres Ltd bought the Princess and did a complete renovation, following a historic theme but anything but historically accurate. They reconstructed a new balcony (in a different place from the original), reconfigured the lobby, and equipped the building to pass the codes of the day. This required closing the rooming house on the third floor and cutting into that space to put the new projection room, to shoot over the top of the newly reconstructed balcony. Offices on the second floor were demolished to make way for rest rooms (funny how no one had to go to the toilet in 1914). The only thing original in the building as it is now is the procenium arch (now widened for CinemaScope) and the mural above the procenium. A plasterer was brought from Europe and a large crystal chandelier was bought from France to enhance the look of the theatre. The new theatre was called the Klondike, after the “Klondike Days” celebration that Edmonton had in the summer. Towne Cinemas Ltd morphed into Landmark Cinemas and they tried to use the Princess as their flagship theatre. However, the neighborhood was disreputable and run down; the theatre had no parking and a very small screen and poor acoustics, and it didn’t ever “take off”. It did play first run product, but first run product that was available to a smaller cinema company at the time, with Odeon and Famous Players controlling the best Hollywood fare. It never showed “porn” but it did show some pictures like the English “Carry On” series that featured women with large breasts.

By and by videos came and wrecked the repertory operation, so it shifted to mostly Hollywood. Then a 12 plex discount theatre was built in Edmonton, and even the Hollywood pictures didn’t make any money. The theatre, instead of supporting the Old Strathcona Foundation, was costing it money. It was sold to a private investor.

This private company attempted to operate the theatre as first run art/alternative, but they were unsuccessful. They leased it to Magic Lantern Theatres (the current operators)in the late 1990s.

Magic Lantern built a small screening room in what was originally a pool hall under the theatre. It is totally separate from the main Princess Theatre, and is called Princess II. Both the Princess and Princess II (as well as the Garneau Theatre, nearby) currently show first run art/alternative product. 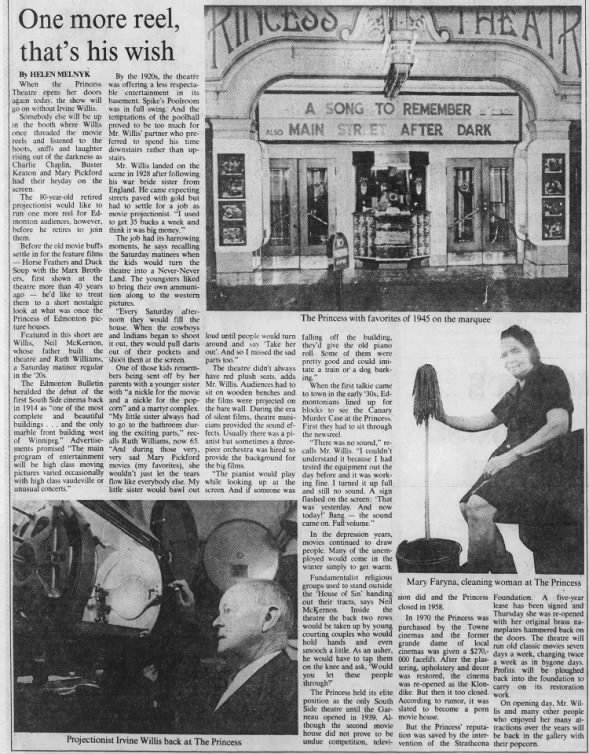 Closed during the Covid pandemic and not yet reopened as of August 2022.