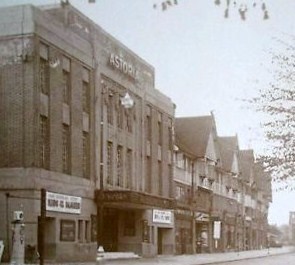 Located in Purley, Surrey, today an area to the south of Greater London. It was the last to be built in a small chain of Astoria Cinemas that were operated by E.F. Lyons in Brighton, Worthing, Folkstone and Southend-on-Sea.

The Astoria Cinema opened on 2nd April 1934 with Maurice Chevalier in “The Way to Love” and Barbara Stanwyck in “Ever in My Heart”. The cinema was equipped with a cafe, full stage facilities and a Compton 3Manuals/5Ranks organ that was opened by Robin Richmond. It also boasted a free car park. Seating was provided in stalls and dress circle levels.

The Astoria Cinema was taken over by the Shipman and King Circuit in February 1949. The EMI Group had taken over S & K and the ABC circuit by 1974 and it was decided to close down the ABC operated Regal Cinema, Purley and convert the Astoria Cinema into a triple screen operation which re-opened in May 1974. Screen 1 in the former circle seated 438 and screens 2 and 3 in the front stalls area seated 135 and 120. A bar was built into the rear stalls area and all decoration within the auditorium was removed or covered over. The Compton organ was removed and installed in a Civic Hall in Ballerup, Scotland (It is now in the City School, Sheffield). On 26 October 1978 an additional screen seating 76 using video projection was created in what had formally been the cafe area.

In 1985 the EMI Group was passed on to the Cannon Group and the cinemas were re-named Cannon. The 76 seat video projection screen was closed in July 1986. After Cannon was dispersed, it was taken back by a new ABC Cinemas company and re-named ABC Purley.

It closed on 13th May 1999 and was demolished in February 2000. Residential flats named Astoria Court have been built on the site.

Thanks to Richard Norman for these two exterior views of the Astoria Cinema, Purley:

A close up of the entrance in 1963:
http://www.cinephoto.co.uk/astoria_purley_3.htm

I should like to point out that the site www.cinephoto.co.uk does not belong to Richard Norman. Nor are the photographs his except for the demolition pictures of the Regal.
I am the owner, and webmaster of this site. About 95% of the photographs also belong to me, including the Regal Purley. These were taken when I was the Chief projectionist.
Hugh McCullough.

Are you “THE Percy Quill” of the Bijou Kinema as played by Peter Sellers in “The Smallest Show On Earth?” One of the best flicks out of dear old England.

I became the second projectionist at the Astoria Purley in December 1969 after being transfered from the Embassy Cinema Tenterden. Kent. Chief Projectionist Roy Roberts and myself were a team of four operators. The other two were second (Richard (Dick) Rapley) and a third operator from the Ritz Brixton. (Mr Hunter) was the manager at the time and I remember two usherettes, (Dawn Preston), and a (Mrs Marston). Somehow, I never took a liking to this cinema, and after only twelve months, left with Chief Roy Roberts to run the State Theatre Grays, Essex.