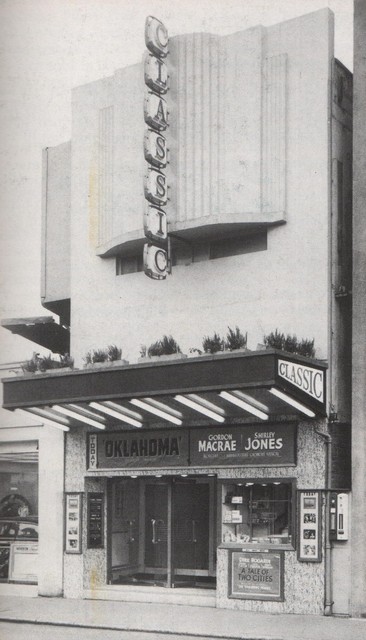 The Swan Electric Theatre opened on 26th November 1910. It had a rather narrow facade, that had a cupola dome on top. By October 1911, it had been taken over by a small South London chain of Central Hall cinemas and re-named the Central Hall. It was re-named Dome Cinema in 1927, but this was short lived and it was closed as a silent cinema.

The Classic Cinema underwent some modernisation in 1962, which stripped out most of the decorative detail in the auditorium. From 4th October 1970, it was re-named Tatler Cinema Club, playing uncensored adult films, and featured live strippers in between the films. This was not a great success in Croydon, and in August 1971, it became the Classic Cinema again, playing its previous fare of Classic Hollywood films. The Classic Cinema closed on 22nd September 1973 with William Holden in "The Wild Bunch".

The building remained empty for several years, and was eventually converted into a nightclub/restaurant named Scott’s Dine & Dance. It was given a Tudor style interior, but the Art Deco style ceiling in the auditorium remained. By 2006, it had been converted into a comedy club, named Up the Creek on the first floor and a bar/Indian restaurant named Fusia on the ground floor.