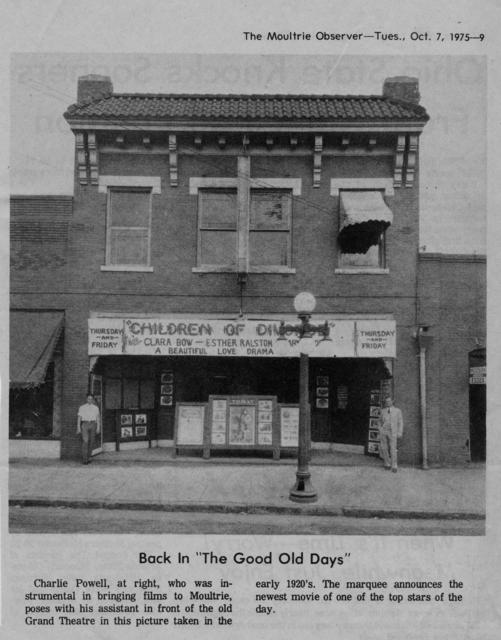 The Grand Theatre was the first major venture for Moultrie, GA. showman, Charlie Powell. Constructed on Main Street in the mid-1920’s, the theatre enjoyed great popularity in the silent era and on into the sound era when it became a B-movie outlet after the much larger and lavish Moultrie Theatre was built by Powell.

The theatre was of a straight-forward design with a small orchestra pit and stage. The movie screen was originally secured to the back wall of the stage–this wall being slanted to correct early keystoning problems. The theatre was entered through an open-air loggia originally. Later, a marquee was added and a vertical sign that spelled “Theatre”. Interior decoration included pilasters with Mission-inspired adornments under each capital, applied panel mouldings on the sides and balcony of the auditorium and suspended chain-hung globes of art glass.

The theatre closed in the early part of World War II and became the location of Waite’s News Stand. It was later used as a frame shop and supply warehouse for Rhoden’s stationers, located in the building adjacent to the Grand Theatre. Present owner, Billy Fallin, Moultrie lawyer and downtown developer restored the building and it is the location of a retail store.

The Grand Theatre is still listed in the Film Daily Yearbook;1950 edition with a seating capacity given as 500. Maybe it closed and re-opened for a while?

The Grand has now undergone a sensitive restoration/adaptive re-use making it available as a retail space. However, other than leveling the floor and installing a central hvac system, the theatre is much as it was in its days of operation including a re-paint similar to former colors and the installation of reproduction wall sconces that are very similar to the originals. The building is currently for sale or lease.

The Grand was located next to Rhoden Stationery and Printing Co., 125 S. Main St. In fact, Rhoden’s used the theater building as a storage warehouse. I remember going in there as a child to look around and there is no way it could have held 500 people. The stage was still there and I believe the floor had already been leveled. The front of the bulding, however, still had a small lobby of a theater. Rhoden’s was always a blast to go in because it looked like they had not gotten any new stock since WWII.

A few years ago a couple came to me and asked me to tour a building they had bought. They bought property in Moultrie that was an office supply store and warehouse and they had discovered the warehouse appeared to have been a theatre. I went over and there was a large opening that had been cut in the wall between the office supply store and the warehouse. The building was stacked full of paper and office supplies. The floor was wood and had been placed over the original sloping floor. You could go down steps which led you to underneath the raised floor. The old orchestra pit was still there. A few more steps down led you to the basement, which was full of black water. The state was still intact. All of the lobby, restroom and stairs in front had been demolished, expcept for the box office. Another stairway had been built from the main floor to the front of the Balcony. The balcony was still intact and included the projection booth, which still contained the amplifier. From the outside of this building you would have never guessed it was once a theatre. I don’t know what the seating capacity was, but I don’t think it held 500. I glad the couple restored the theatre. It would have been nice to have seen it back as a theatre, but in this day and time, there is little room for small one screen theatres. Moultrie has a 6plex in operation.