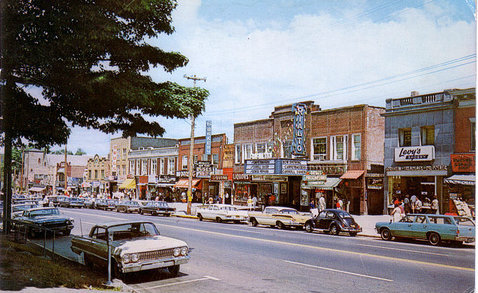 The Rialto Theatre in Monticello, NY opened in late-1921. A Robert-Morton organ was installed that same year. This theatre was demolished in 2003, except for the former lobby area and marquee.

Despite it’s status as a historic theatre the auditorium was demolished in 2003 after damage from heavy snow caused the roof to collapse. The lobby building and marquee still remain.

I was doing summer stock up there in the 70’s and I believe this was the theater where a bunch of us went to see “The Spy Who Loved Me.” Carefree days !

Not the best of photos but a photo any how!

Passed the theater yesterday. Sad to see both the Broadway and the Rialto abandoned just waiting for the wrecker’s ball sometime in the future.

The Rialto’s auditorium is already down. Torn down about 10 years ago. Last time I drove around back, you could still see the aisles imbedded in the concrete where the auditorium once stood. The lobby building was saved for retail space.

My family used to vacation in Montecello each summer. One of my favorite things was the fact that the theaters upstate would show films that were then still playing on Broadway in NYC. I remember seeing “Guns of Navarone,” Sinatra in “Von Ryans Express” and “Cleopatra” at the Rialto, while it was still playing reserve-seat on Broadway. After the movie, there was a store a few stores away where I would purchase my beloved DC comic books.
Sorry to hear that this theater, like so many others, I attended is gone.

From the early 1960s a photo postcard view of the Rialto Theater in Monticello.

Either Washington and Miller switched architects, or Emil Motel might only have been the supervising architect for the Rialto Theatre. The February 2, 1921, issue of The American Architect ran this item:

George W. Backoff, George Elwood Jones and J. Frederick Cook established their partnership in early 1920. If the house did open in 1921, especailly the first half of the year, they probably designed it, but if it didn’t open until 1922 as this page says, then the architect might have been changed.

Advertisements for the architect in issues of the Monticello Republican Watchman spell his name Emil Motl. The NRHP listing for the Rialto uses the spelling Motel, though. It’s possible that he eventually Americanized his name, but as late as 1940 the census lists an Emil Motl, age 53, living in Monticello, New York.