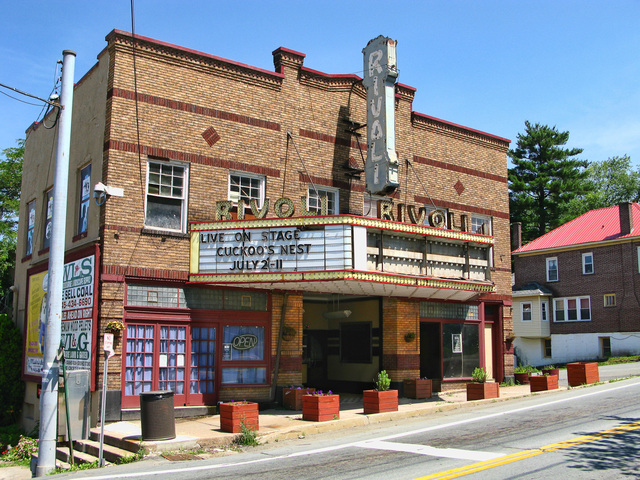 The Rivoli Theatre opened in 1910 as a vaudeville house and later became a movie house. It was expanded in the 1930’s with a remodel in an Art Deco style motif. Renovated again in 2002 and is used for live performances, and from 2012 movies were being programmed.

I worked at the Rivoli for several years, and could probably tell you anything you need to know…..

There is so much I want to know. Which seats were the original? The green velvet or the Art Deco? There are dozens of switches and electrical components that are a mystery to all of us. We had a guy up from SC who used to run the projectors in Woodridge or mountaindale who showed us quite a bit in the projecyion booth, but we want to know more of the history and events.

I beleive the green ones were the original. They were replaced by the red. I’m not sure where the ‘switches and electrical components’ that you are referring to are. I was actually a PROJECTIONIST there for years, so I may be able to help you further if you give me some more details. Also, did you know that I heard that the room behind what was the concession stand when I worked there was originally an ice cream parlor (the floors were still red/black tiled when I worked there), and the room that was the office used to be a candy store? Who was the guy from SC that you spoke with? I may know him and may be able to get in tough with him if you wanted to speak with him again. Just curious: Did you pull the projectors out? Or are they still there?? So many GREAT memories at the Rivoli!!!!

There are a lot of electrical boxes and switches, mainly in the projection booth, which we have no ides of their use. We blew a circuit, a wall outlet and booth ceiling lights, and we can’t locate the correct fuse or breaker.
I doubt much has changed since you were there, only what was necessary for our live shows. The projectors are still there, we are looking to get rid of them and the screen, for a fair price of course.
We sold an old projector (head)to the guy from South Carolina, his name is Marvin Mednick, used to run the projectors in Mountaindale or Woodridge. He wrote a book about it.

To the annonymous writer of Nov. 5, 2006. My name is Marvin R. Mednick and I am the author of the novel “The Lyceum” about a movie theater located in Woodridge, NY, three miles from South Fallsburg. It operated within the Kallet Theater Chain, along with the Rivoli(South Fallsbrg),the Center(Woodbourne), the Strand(Loch Sheldrake). My father, then I were the projectionist there from 1945-1964. We also worked occassionally at the Rivoli.

Some things about the Rivoli:
During the winter months they ran what was called Bank Night; every Wednesday between the first and second show they drew raffles for monetary prizes.

One day during Xmas school break they would run a cartoon/shorts marathon matinee and would hand out boxes of Xmas candy.

The only way to get to the projection booth, was from a metal ladder that ran straight up to a trapdoor located in the lobby of the theater.

The manager, Tony Balducci, was a wounded WWII veteran who lost one of his legs. You could here him stomping down the aisle with his artificial leg. He was very artistic and was responsible for much of the art decor cutouts displayed in the lobby.

The Rivoli was the flagship of the chain and as such, many of the parts for the other theaters were stored there. I purchased an old standard Simplex Head (used at the Lyceum), several movie reels, one each positive and negative carbon rods, regular and cinemascope lenses, and the photo-electric cell unit.

The Rivoli projectors utilized the Simplex E-7 variety heads, the Strand used Super Simplex, and the Center utilized the odd looking Motiograph projectors. They all had Peerless Magnarc lamphouses.

to SCDW – After reading this site, many fond childhood memories were brought to mind about the Rivoli and my childhood in Fallsburg. My fater was the town doctor, Dr. Isidore Turner, and we lived in the yellow house that abutts the parking lot. Many an hour I and my peers spent in that darken theatre watching films and cartoons all year round. I remember those winter nights when my parent would allow me to go to bank nite and the other nights when door prized of carnival glass dishes were give out.
When Jerry and Sylvia Sakofsky – owners of Star Dairy – lived in the apartment above the movie house, I remember their son, Herb and I, would sneak into the projection booth and watch movies in our pj’s.
I too remember Tony Balducci-ie. Peg Leg. He was the terror of the entire kid population of Fallsburg. For if he ever had to discipline you in the theatre or eject you – there was double trouble ahead. Since he knew every child in town, he would call home and inform your parents of your crime and you caught hell when you got home. Tony had a son and a daughter – once I remember the son opened the forbidden door behind his father’s office desk that led to the vast dark and dank cellar of the theatre. I can still remember the sight and smell of the cellar.
Every week, either Tony or a worker at the theatre, would appear at the post office with rolled up posters to be sent to all the local hotel and bungalow colonies advertising the next weeks offerings. Tony was also seen nailing these posters to many of the telephone poles up and down Rt. 42. One of the weekly tasks I had was to tape a poster to the door of my grandmother’s boarding house, Turner’s Villa, for her boarders to see. In fact, a few years ago in a local antique shop, I found and purchased two of the old Rivoli posters which are present and proudly displayed in my basement.
In the winters, the movie parking lot became our special winter sledding site and challenge. At the bottom of the lot was a slope that when hit correctly sent one airborne onto Louis Levine’s (the owner of the lumber yard directly across the street) lawn. Later, Jules Charlow – co-owner of the Irvington Hotel, bought the property and put in a gravel driveway. This posed both a danger and a challenge – for if you landed on the gravel, one could damage their sled and get bruised, but if you hit the slope just right, you now tried for a distance record landing.
One last memory of the Rivoli and Tony that I have – In the second year of teaching English at Fallsburg Central HS, my classes had just finished reading Capote’s, In Cold Blood. As fate would have it, the movie was about to be shown and Tony allowed a special evening showing of the movie for my students, as a tie in to the film and literary work. I can’t imagine, in today’s day and age this happening. But, that was a different era, a different place, and a different type of people!

Hoping to hear from you soon – mike turner ()

As President of Theatre Historical Society, I am thrilled to be visiting the Rivoli next week! Really looking forward to meeting the crew there and taking photographs for inclusion in the THS archive.

I had a wonderful visit with Sally and Bunny at the Rivoli on Monday, November 16, 2010. This darling little theater has a lot of heart and I look forward to returning one day soon to see the restored marquee light up the night sky!

The Rivoli is showing movies now! Check out their movie schedule at www.scdw.net. It’s a treat to see a movie or a show in this historic gem!